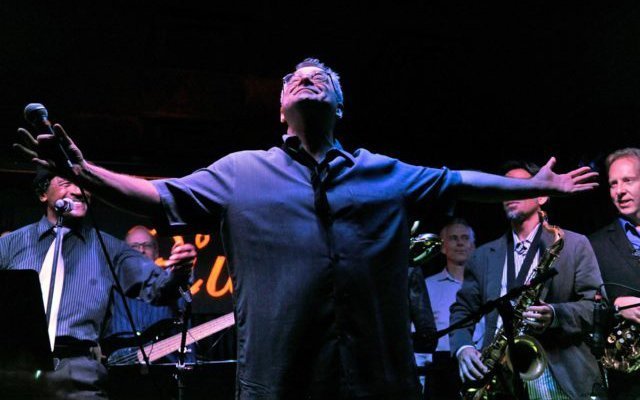 It seems like “another day, another big band recording”. But the reality is quite different. It’s always exciting when am artist of Ed Palermo’s status is at the centre of another big band recording. This time, however, he’s not reminding us of the relevance in Jazz of Frank Zappa’s music, but venting his spleen on The State of the Union with A Lousy Day in Harlem. There is none of the biting sarcasm that so characterises Mr Zappa’s humour. Rather there is a dark and pervasive existential dread at the splintering of the American Dream. And so, underlining the unfettered swing of these big band charts is a palpitating tempo marking the urgency with which the heartbeat of the country is beating as the all-pervasive political beast threatens to devour itself. 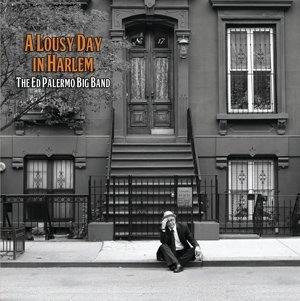 The reference in the title will not go unnoticed. It was, as we know, a memorable day when fifty-seven iconic Jazz musicians stood on the stoop of a brownstone located at 17 East 126th Street between Fifth and Madison Avenue for a black and white photograph by the great freelance photographer Art Kane; an historic day that came to be called A Great Day in Harlem. Mr Palmero’s cover – the photograph followed by the title – is that of the bandleader alone, hand on forehead, bemoaning it would seem, a great loss, seemingly not only of everyone around him, but in its singular desolation – everything. Of course, there is a black joke on the inside of the inlay-card. There is no one because no one told them to come? Where are they? Gone? But where? And then a sequence of mock-violence to mark the age of “Trumpism” followed (a fold later) by the reminder “Don’t be a jerk-off – vote!”…

That chilling thought is often echoed in the lonely and unsettling howl of the three trumpets, underscored by the growl of the trombones and a strategic beat of the tubular bells especially poignant on “The Cowboy Song”. Again, I wonder if the reference to “Cowboy” is not deliberate – a harkening back to an anarchistic time when gunslingers often triumphed over law and order? It isn’t inconceivable that Mr Palermo’s music echoes that sentiment – in the often cacophonous ensemble or the sometimes ponderous pace and the harmonics which suggest that something sinister is about to happen. But, as always, the suggestion is that in the final analysis Jazz is a music of hope, which is why you will find here – interspersed between raucous big band charts – a reminder of those very voices of hope: Duke Ellington (“Brasilliance”), John Coltrane (“Giant Steps”), Gigi Gryce (“Minority”) and Thelonious Monk (“Well You Needn’t”) – the latter’s in all its crinkly and angular humour.

The artist is often the invisible guerilla in society – certainly anyone who pays heed to Mr Zappa as Mr Palermo continues to do – a great disrupter – to borrow from Dante’s (and Pound), a “stirrer up of strife” – a poet whose weapon is a metaphorical two-way mirror of words is held up to society and those who try to manipulate it with maleficent intent – in this case, a politician on the wrong side of history is trying to do. In Mr Palermo’s mirror is reflected the sound of his big band playing his larger than life arrangements loudly, so that we will get an earful of his music that stirs us up and disrupts our senses enough to make us – when the last notes of the music dies down – suddenly become aware of the dissonance of everything else around us; a feeling that we come away with after the experience of listening to “Giant Steps” and “Next Year” as if after a disquieting epiphany.

Of course, everywhere the music oozes stylish urbanity. Musicians play brilliantly throughout, echoing the architectural nature of charts, dense with changes in mood, structure and tempo. The considerable degree of balance and integration of melody, harmony and rhythm, of composition and improvisation, of exploration, individuality and tradition is impressively maintained throughout this constantly interesting programme.