The artistic conscience and the fact that it is compelled to create works of relevance have always weighed heavily on Ezra Weiss. It is this that has enabled him to use his unique genius to fashion music not simply of great beauty, but also of great relevance. Perhaps the terrible history of the Jewish Diaspora and the horrors of the enslavement of the African American but Mr Weiss seems to be in a slim minority who has not only cared to make the connection, but in the spirit of true Ubuntu made music such as this gloriously beautiful work From Maxville to Vanport performed by the Portland Jazz Composers Ensemble. 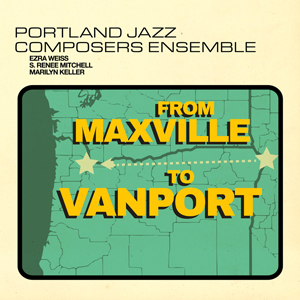 There is, something else, however. There is probably no work by a white composer – certainly not in recent times – that has so successfully forged the African-American idiom of the Blues, melded in with Jazz and that too melded these secular forms with the sacred Negro Spiritual. Of course this work would not be the same without the lyrics written by S. Renee Mitchell – a libretto, really – nor would the powerful story of survival of the Negro communities who helped build Maxville in 1923 and Vanport in 1942 against all odds be so compellingly told without the seductive and sinewy vocals of Marilyn Keller whose soaring contralto tells these powerful stories together with the Portland Jazz Composers Ensemble, directed by Douglas Detrick. All of this certainly makes for a work that ought to be celebrated wherever (and whenever) it is listened to.

The music is crafted as a composer would an opera in the classical music world. Mr Weiss is no stranger to this, having produced works on such a scale before. His setting of Alice in Wonderland is an example that comes to mind. However, this work has certainly been conceived of on a much larger canvas; a historical one that is, moreover, long overdue. And while it might never erase the memory of the heinous crimes that have been committed against the African American in the name of slavery (nothing really can) an acknowledgement such as this one, of this bitter truth is certainly a step in the right direction, one that would help in the healing. And for that this work ought to be celebrated with appropriate pomp and circumstance. For now, though – certainly listening to this work – copious tears will be shed.

The warmth of the acoustic is superb and captures the magnificent enunciation and articulate vocals of Miss Keller to perfection a booklet to remember these lyrics which soar with the poetry of emotion is certainly de rigueur – and sorely missed. For with a printed libretto one would read these words several times over, especially those that accompany the music of “What Do Your Trees Tell You?”. There is a metaphor here that not simply brings the blood, sweat and tears of bonded labour alive, but almost mystically speaks to the secrets that are locked in the wood that framed the old houses in which master controlled slave – every dark secret of the Jim Crow Era magically hammered into history with each nail wedged into the rafters and roofs of those houses.

Of course there is much more to herald the singular historical and musical importance of this work, but its pathos and beauty is forever enshrined in the cathartic effect of that one song. This is truly music to die for.