Despite the word “subtle” in it title Joe Locke is almost completely all brimstone and fire on Subtle Disguise, but this is far from the anger that he is almost certainly fighting against in America. Rather it’s the lyric kind of “rage, rage, against the dying of the light” that the great Welsh port Dylan Thomas urged in his great villanelle “Do Not Go Gentle into That Good Night”. In reality, while Mr Locke has a singular, sinewy approach to the vibraphone, he is also a profoundly lyrical as well. He makes us aware of this especially on “Make Me Feel Like It’s Raining” a reference to one of the many emotive ways in which music moved the great Bobby Hutcherson into listening to it. In between the fiery and the lyrical Mr Locke is also capable of immense subtlety and we can sense this time and again not only in his soli but in the overall mood and emotion of his playing. 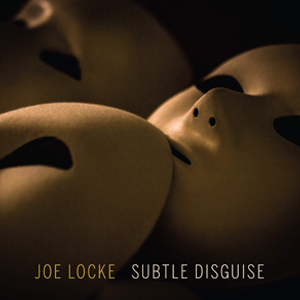 Mr Locke plays with marvellously loose wrists and his two-fisted, harmonic approach to the instrument enables him to draw a wondrous palette of tonal colours. Meanwhile, he often lays glancing blows on the bars of his magnificent instrument. His playing is also sometimes redolent of aching, moaning blue notes – a proverbial doffing of the hat to the legendary Milt Jackson despite the fact that his style is closer to his (obvious) mentor Mr Hutcherson’s soaring lyricism. The blues is what we discern on “Subtle Disguise” as well as on Blind Willie Johnson’s iconic “Motherless Children”; the lyric hear is superbly voiced by the sensation Raul Midón, who reappears after his racy vocal and guitar performance on Bob Dylan’s “Who Killed Davey Moore?”

As the vibraphone field is getting a little more crowded with Stefon Harris and the wunderkind Joel Ross making tidal waves on the instrument some elder practitioners might have to re-invent themselves to stay relevant. This is not something that is of any concern to Mr Locke. On the other hand, with his music that arises out of outstanding social commentary, he seems to wear that mantle of “leader” lightly. But it isn’t simply the “social flavour” of the day that drives Mr Locke’s musicianship. He is a master of melodic music as is evident from the ethereal beauty of such compositions as “Make Me Feel Lite It’s Raining” and the breathtaking portrait “Blondie Roundabaout”, the latter quite the contrast from the elegiac nature of the former song, which only goes to show just how diverse Mr Locke’s musical penmanship can be.

The group of musicians with which Mr Locke has surrounded himself here are clearly in tune with his artistry and vision. Moreover, the superb, ambient warmth of the recording heightens the listening experience of music – especially “A Little More Every Day” with the ineffably beautiful voice of Alina Engibaryan holding court to close the album – that is something to die for.