Home Music Peter Erskine & the Dr.UM Band: On Call
The immortal Peter Erskine, really arrived in 1978 holding the drum chair of Weather Report, and from that time onwards it became clear that he was in a class by himself – especially as he went on to support Jaco Pastorius. Ever since then he has really needed no extraneous support and brooked no competition as a drummer, his voice so unique among all of the drummers who came to The Weather Report before and who followed him since. Although the drum set has been his natural medium, his influence has been for from merely rhythmic.

Peter Erskine – or Dr.UM, as he is now known – does put on a drum clinic every time he performs on stage and in the studio and although one is always aware of his authority as a percussion colourist, it is always a thrill to listen to his drums swing and sing often making him a veritable one-man band. The manner in which he dominates proceedings on “Northern Cross” melodically is a proverbial treat for the senses. 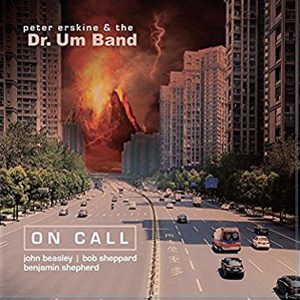 But the truth that Mr. Erskine could be similarly thrilling in the company of others – especially in his current fraternity that includes the incomparable John Beasley, the magisterial Bob Sheppard and the brilliantly questing Kiwi-born Benjamin Shepherd – is a revelation, especially with this their third album – and more especially on the live, second disc.

Live performances are always viscerally exciting more so on those which have not been tampered with once they have been recorded and this is true of that part of On Call that has been recorded in Occhiobello, Italy on the group’s 2017 swing in the boot of Europe. But make no mistake, this is an uniformly brilliant production whether in the studio or on stage. The energy of Mr. Erskine and the Dr.UM Band is palpable right out of the gates. Saxophonist Mr. Sheppard is chameleonic in his adoption of a more discursive style, featuring idiosyncratic pitching and – on the rare occasion – even one that risks evaporating entirely in a transcendental puff of quintessentially rhythmic smoke.

Meanwhile those who might have claimed (in the past) that John Beasley didn’t really swing (preferring, instead to lean on his classical chops) will have their minds turned by his attack on “If So Then” and on the sublimely puckish “Eleven Eleven”. The young bassist, Benjamin Shepherd, meanwhile brings a ripping intensity to the music of “Two Paths” and “Dreamsville” not unlike that once infused into Weather Report by a young Jaco Pastorius. But make no mistake it is with fizzing brushes, romping sticks and thundering mallets on drumheads that Peter Erskine holds sway letting us know that at every turn that the good Dr. is not only On Call, but Always In and in complete control of proceedings. And what a fine approach he has to the soothing of the savage breast.