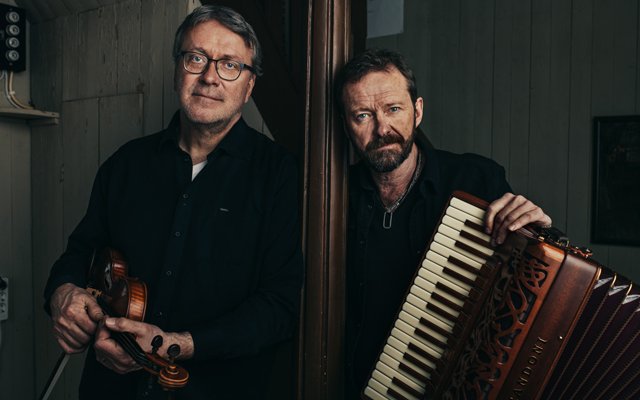 Clearly according to fiddler Per Gudmundson and accordionist Bengan Janson tradition is a wonderful reality, but they are also cognisant of the fact that the inner dynamic of tradition is to always innovate. We hear this all over Hjeltamôs, a record (now) celebrated at least in Sweden with two well-earned major nominations: the Swedish Grammy and a Manifest; and they won the former for the best folk recording. It’s no wonder that the duo did for this is a recording of seventeen traditional Swedish songs and some new ones that form a uniquely beautiful, defiantly provocative body of work from out of the bedrock of the Swedish tradition.

While this may imply pastiche of archetypal folk and romantic polskas, the music is anything but that. This is music that has been gorgeously chiselled out of the rock of ages, but also by actively engaging melodic, structural and harmonic hooks in a brand new way. Using sublime gestures that were passed down the line by such folk masters – from Anders Hjelte, Erik Olsson, Höök Olof Andersson and Gössa Anders Andersson, master-craftsmen of another era and fine-tuned by Björn Ståbi, a celebrated fiddler, painter and cartoonist of the modern era to whom this music is dedicated– the duo of Gudmundson and Janson have re-created the most beautiful pastoral music of Rättvik, in Sweden’s central region.

In the gentle arco movements and dramatic double-stops of Mr Gudmundson’s bow that creates waves of rippling melody that form the warp to the harmonic weft of Mr Janson’s wheezing accordion. Definitions of beauty are central to the artistic credo of these musicians. Both eschew the overly perfumed kind of music which can be disturbingly manipulative and detract from the heart of the emotion of the songs. The duo instead supplants that kind of commercialism with authentic beauty that brings to life the sounds of the Rättvik valley echoing with the soft footfall of pasturing herds amid the sense of natural noise of wind blowing and trees rustling all naturally melded in with the high and lonesome sound of the fiddle and the accordion especially on “Hjeltamôs” and “Polska efter Höök Olle”.

All of this is, of course peopled with the joyous sounds of men and women celebrating on “Orsa Brudmarsch” (“Orsa Bridal March”) and “Dal Jerks Jässpôdspolska” to the exquisite “Grattis Lotta” which captures a little girl celebrating the thrill of blowing out candles on a birthday cake and frolicking with a crowd of other celebrants. The recording is vivid and dramatic and in it one hears what must have been going on in the inner ear of Sweden’s great traditional musicians as well as how this has evolved into the elementally fresh sound-world of Per Gudmundson and Bengan Janson.