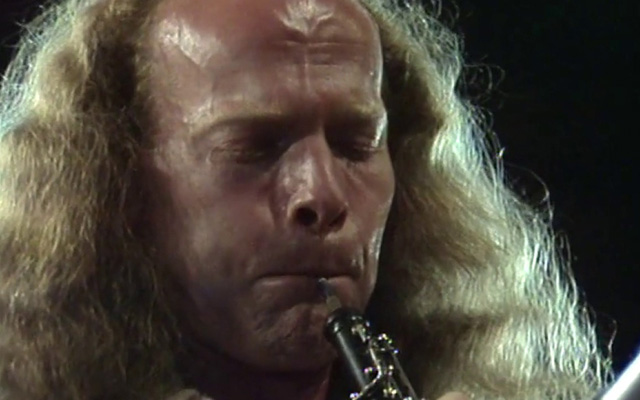 Morning Sun, this sixteen-work, single-disc album of the oboe music of Paul McCandless with the Paul Winter Consort actually feels like a sweeping retrospective and it can well be perceived as such considering the fact that the music is culled from The Consort’s first album with Mr McCandless, Icarus in 1971 to Miho: Journey to the Mountain in 2010, but also includes work from legendary Solstice performances of The Consort at the church of St. John the Divine, NYC. Paul McCandless also plays English horn (represented by five pieces on the album), bass clarinet and soprano saxophone (not heard here), whittling down his virtuoso performances to those instruments after virtually giving up “the saxophone” when, by his own admission and upon the advice from his celebrated teacher, Robert Bloom, he was advised to focus on the oboe. Mr McCandless once brought his piece for oboe – “All the Mornings Bring” – to Sir George Martin, also an oboist who produced Icarus, and who reputedly “loved it”. The rest, as they say, is history.

Such trivia among a myriad others – apocryphal and/or vulgate – might (and does) spice up the chapters of the 32-page booklet within this package. And it is the iridescent harmonic torrents played by Paul McCandless seemingly at the drop of a hat that fills the rest of the album that is brimful with genius, not just Mr McCandless’ but also that of Paul Winter, the oboist’s principal employer – apart from Oregon, the music collective that arose out of The Consort. This viscerally exciting music often sounds as if it has sprung into being from a point before or beyond the modern world, evoking elemental human or natural forces, the elemental cycles of the natural world; the very march of Time itself. 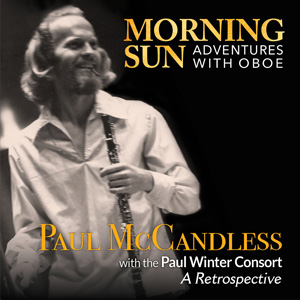 It is music of spare lyrical beauty and, on occasion, haunting delicacy redolent of Paul Winter’s gently wailing woodwinds, exquisitely plucked guitars by Ralph Towner, the late and legendary Brasilian Oscar Castro-Neves and more, alternating with hushed interludes of intense but muted lyricism by Paul McCandless on oboe (and English horn whenever it is played).

Throughout the sixteen pieces we get a sense of the glorious musical description of real and imaginary landscapes seemingly etched and painted into a glistening eternally wet canvas in which the listener is slowly led through ever-changing musical scenery, every so often viewing the same landmarks from constantly evolving perspectives. This geographical, rather than chronological, approach to Time is one of the most wondrous aspects of Paul McCandless’ music as evinced both within and outside the music of Paul Winter and his Consort, as if the haunting and flowing lyricism – powerfully muted for most of its length but rising, every so often, to a vast vortex-like climax. Musical signposts will often appear different, at different times of listening or depending on one’s mood and sense of balance at any given point at the time of each listening. However, one can hardly avoid the absolute power of Jim Pepper’s “Witchi Tai To”, this breathtaking version featuring the mesmerising vocals of John-Carlos Perea, a young singer of Apache heritage. (See also video below).

Perhaps, not all that oddly, one feels as if one is being “walked” through the endless corridors of Pictures at an Exhibition of Mussorgsky, or perhaps even the pages of Pictures from Bruegel William Carlos Williams’ monumental series devoted to the work of the Flemish painter Pieter Bruegel. But through such conjuring one’s mind’s ear invariably catches the snatches of doleful oboe or cor anglais melody which memorably punctuates the works as they take over from soprano saxophone. All of this exemplifies the vein of plangent lyricism which is buffeted by the brilliant pizzicato trills of guitars, pastoral sounds of the Uguisu and the Whooping Crane, the poetic grandeur of the vocalists and percussion colourists. And together it all makes for the glorious retrospective of Paul McCandless, hosted as it were, by friend and big brother, the extraordinary Paul Winter.