The brilliant British pianist Paul Lewis established his mastery of Beethoven’s five concertos in performance and recordings many years ago and he did the same with his Schubert and Brahms. Now the pianist has turned his attention to Joseph Haydn’s keyboard music – to four of his piano sonatas (39, 40, 49 and 50) to be precise. And once again, Mr. Lewis can do absolutely no wrong. Not only does 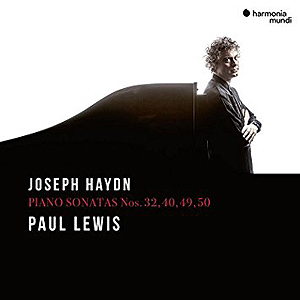 he bring the singing voice of the piano to life here, but he draws ounce of Haydn’s expressiveness, his occasional whimsy and above all the immense lyricism of Haydn’s pianism in each of these four sonatas.

Themes are brilliantly explored for conception of variation form and the variations themselves superbly enunciated and articulated for their innovation. The intensely personal nature of this music by Haydn is explored with characteristic depth and spirit. And here Haydn emerges as a composer of keyboard pieces that have all of the genius of the keyboard work of C.P.E. Bach, to whom Haydn owed much by way of their Germanic traditions and piano conventions prevailing at the time. Mr. Lewis captures all of this and something else more magical too. Remember he is playing on the modern piano, which, given its wider dynamic also means the need to exercise supreme control of the softness that Haydn probably intended when he wrote these pieces for the (daintier) fortepiano.

The performance on this disc is uniformly magnificent, but “Sonata in C major Hob. XVI: 50” stands out. It’s clear that Mr. Lewis has mastered Haydn as he plays him with just the right blend of wit and meticulousness. Mr. Lewis is a gentle advocate, never pushing too hard; his reading of the sonata’s Adagio brings out the depth of its emotion and charm while in the final Allegro molto movement he lets the sonata do its own persuading without any forced bravura. It bears mention that elsewhere Mr. Lewis takes – like Mikhail Pletnev and unlike Alfred Brendel – a more extreme interpretive line, shaping the phrases more overtly and often varying his touch between hands. This works extremely well, never becoming too mannered in any of the repertoire on this exquisite disc.