When, if ever, have you heard the music of Benny Goodman played by another clarinetist as pure music, given as naturally as breathing, yet created from an entirely novel perspective? From Orin Etkin, Benny Goodman’s poetic essence, hidden beneath every thorny, relentlessly focused problem, emerges with an inimitable subtlety and elegance. Mr. Etkin gives us tone poems first and studies second, his technique as unobtrusive as it is effortlessly fluent, lissom and precise. Take Prelude, from Mr. Etkin, a grand maestroso curtain-raiser that transcends a more familiar and determinedly virtuoso rush. King Porter Stomp is brilliantly articulate rather than manic or blistering (re: other clarinetists), what intuition in the agitated short-long-short phrases of Sing, Sing, Sing. 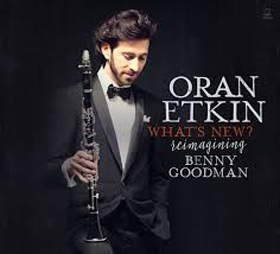 Rarely have I heard a more assured left and right hand in the cadenzas and flourishes of Dinah (on bass clarinet) and this within the context of a magically confided reading. Running Wild is playful and giocoso while in Oran Etkin, with Charenee Wade, shows himself no stranger to strength and drama when Benny Goodman is in his most melancholic, stormiest minor mood. Yes overall this is the luminous quality of Mr Etkin’s musicianship that strikes you at every turn. Motema Music has struck gold and I can only wish that such a perceptive, natural and unforced talent will remain untarnished by commercial pressures. Never for once would I want to be without celebrated recordings by Mr Etkin, Marc Cary, Geri Allen, Charnett Moffett, David Murray and more but for a memorable musical recreation Orin Etkin stands alone.

If you get so much of this disc from Orin Etkin alone, how much more will you get from the whole ensemble? This is one of the most intuitive and empathetic groups with Steve Nelson absolutely radiant, for instance, on Running Wild; Charenee Wade sultry and beckoning on After You’ve Gone; Sullivan Fortner connecting with everyone from the greats of the past stride era, to the modern percussive detail of the avant-garde on Running Wild and Matt Wilson ever graceful with song after song conveyed more musically and effectively. This is production at its finest when you put together a transcendent group of musicians who become like a well-oiled machine – study after study.

All things considered, there is a sense that these artists absolutely have the measure of the music in the allegro con brio of Sing, Sing, Sing where others reveal a degree more mystery in its development section. And while the quiet musicality of passages such as the profoundly beautiful minor–key variations of What’s New or the jet setting King Porter Stomp are effective on their own terms. This does stand, in all honesty, with the very best of Benny Goodman himself and that’s saying a lot about someone as young as Orin Etkin as he leads this celebrated group on its eventful voyage of discovery of the music of Benny Goodman.

Track List: Prelude; Dinah; Why Don’t You Do Right; Running Wild; When Every Voice Shall Sing; What’s New; Brink; King Porter Stomp; After You’ve Gone; Be Good Lady; Where Or When; Sing, Sing, Sing.

Oran Etkin moved from Israel to the United States at age four. Surrounded by classical and Israeli music, he heard Louis Armstrong at age nine and became entranced by the trumpeter’s soulful sound, swing and melody. Armstrong inspired Etkin to search for a way to express himself through music with honesty and integrity. Etkin’s search led him to Benny Goodman, a musician also raised in a Jewish immigrant home and transformed by hearing Armstrong. Read more…