If ever there was a forward-looking tribute to Miles Davis’s electronic period it was this disc: Kind of New by Jason Miles and Ingrid Jensen. The former pays tribute to his old boss, Miles Davis and the latter plays Miles Davis in this remarkable performance. There have been some rather good tributes, but they are oblique, others have been copycat. This disc cannot be accused of any of the above. It is – as Americans would say, indeed as Miles would have said – so totally ‘hip’. It tells a story, a kind of narrative soundtrack of the life and times of Miles Davis. It all but reaches the levels of intensity that Heiner Stadler reached in his one-of-a-kind tribute to Thelonious Monk and Charlie Parker, Tribute to Monk and Bird (Tomato Records 1978/Labor Records 2011).

It is remarkable for one more thing: the dramaturgy of Miles Davis’s music is revived as only an alumnus of the Miles Davis school of thought might have and of trumpet playing that is singularly Ingrid Jensen – high and lonesome, with biting sarcasm and attitude, and yet with an elegance that so defines Ms Jensen’s music. Miles Davis was the arbiter of many good things, and it’s no coincidence that the only composers paired with any reliability and genius – especially with Mr. Davis’s electronic-period work – is contemporary. Not only because Miles Davis inevitably made so many of his contemporaries sound inferior when standing next to him but because he provided such a useful and grounding touchstone for new music. 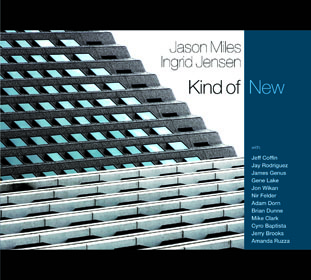 That theory only bears out, though, if the Miles Davis is played as straightforward, accomplished and without overpowering ego. It’s a relief, then, that Jason Miles’s and Ingrid Jensen’s opening performance of The Faction of Cool on their disc Kind of New is just that – an admirable performance technically, with just enough of a stamp of their own personalities to make it distinctive, the tempo of relationships make sense, and the musical argument is intelligent but uncomplicated. It is, then, the proper arbiter of the good and different things that follow, in the form of new works that in every way reflect Miles Davis’ visionary sensibilities, from the evolution from simplicity to virtuosity of Mr. Davis’s compelling electronic period (discs such as In a Silent Way and Circle in the Round (to name but two) to remarkable conceptual references to the songs such as the (Miles Davis) those with the ghostly phrasing of the Gil Evans music written for Miles Davis’s horn.

All this could set even the most intrepid virtuoso explorer (Miles Davis) by the ears, yet Jason Miles and Ingrid Jensen’s musical intentions are always paramount. They storm everything from The Faction of Cool to Sanctuary – including all the interludes from end to end – with full-blooded romanticism and find all the sultry romantic and romantic atmosphere of Shirley (for instance. If Miles Davis’s music betrays the influence of his own mentors, then they (Ms. Jensen and Jason Miles) are also highly individual and distinguished, their often playful quality ironically surfacing through a formidable intricacy. More to the point, Jason Miles and Ingrid Jensen play with unfaltering bravura and conviction, and they have been superbly aided and abetted by their supporting cast and also the engineers who have made this an excellent recording.

In an industry where copycatting and contrivance is too often encouraged and true creativity and innovation is needed but not always rewarded, Jason Miles has stood his ground as a true musical visionary. From his groundbreaking synth programming on Miles Davis’ 80s masterpieces Tutu, Music From Siesta and Amandla to his current partnership with DJ Logic and Falu in the pioneering global fusion group Global Noize, the Grammy Award winning New York native—dubbed by one insightful veteran journalist as the “Quincy Jones of Contemporary Music”—has consistently brought the highest level of artistry to his multi-faceted recordings (as both producer and artist) and live performances. Read more…

“Ingrid plays trumpet and flugelhorn with all the brilliance and fire of a true virtuoso, following the spirit of the muse as she creates… …warm, sensitive, exciting and totally honest…..” Marian McPartland. Born in Vancouver and raised in Nanaimo, Canada, Ingrid headed east after receiving a number of scholarships to attend the Berklee College of Music in Boston. Since graduating in 1989, her life has contained a whirlwind of musical activities. From her early days playing in the subways of New York, to establishing herself as a leader and soloist in a wide array of musical genres, Ingrid has made her mark. Her three CD’s for the ENJA label and her latest CD, At Sea, won her nominations from the Canadian Juno Awards, including an award in 1995 for Vernal Fields.. Read more…