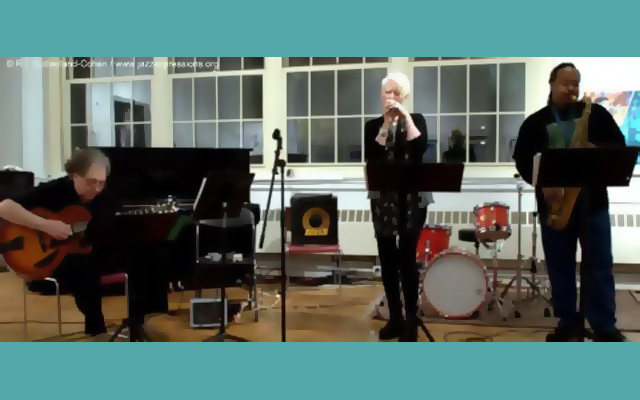 The creative outlook of this trio of improvisers is formed by their vast experience in recitation, voice artistry and free instrumental improvisation that has been influenced by the limitless exploration of sound. Nora McCarthy, brings her leaping and loping vocalastics, Dom Minasi, evokes both the visceral excitement and the gliding elegance of the guitar and Ras Moshe does for the tenor saxophone what Mr Minasi does with the guitar on Manna for Thought an album of music that combines music with exuberant vocal excursions that combine free verse, nonsense phonetics and the sound-mass textures of the tenor saxophone and guitar as well as often zany theatricals and other adventures by these three brilliant musicians. 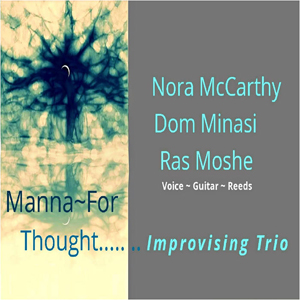 Musically the disc shows each of the musicians at their most diverse, featuring such strikingly offbeat inspirations as from a car (or cars) in traffic, spirituality, electronic contraptions and nature performed with portentous music vibrating with rhythm and harmonics superimposed over Miss McCarthy’s gleaming alto. The grizzled voicing of the tenor saxophone is overlaid onto the round sound of Mr Minasi’s guitar always with a decidedly dissonant flavour comprising the innovative counterpoint of fluttering vocalisations from the tenor saxophone and deliberately wrong-footed chordal and other pizzicato motifs and gestures from the guitar. All of this is expressed in a complex rhythmic style in which conflicting layers of tempi are used to drive the music forward.

The musicians often led by Miss McCarthy explore the possibility of creating a monumental, pulseless music made up of shifting layers of glacial music, all with subtly changing textures whose component parts slide and flow seamlessly in and out of each other. One spectacular example is “The Whole Thing” which begins – as usual, simply enough – with Miss McCarthy leading the charge but soon morphs into a sort of low musical growl after the tenor saxophone and the guitar come screaming in. Like its companion pieces everywhere on the album, the impact of this track is overwhelming.

One moment the saxophone seems to evoke a great wheezing organ, another time the frenetic strumming of the guitar, a swarm of demented bees. Texture is everything; there are no silences, instead the music is punctuated by a series of enormous crescendos. The rest of the music while forever in improvising mode – and therefore constantly changing – is, nevertheless similar. Still the overall effect is very different. Clusters of closely held sound by Miss McCarthy, Mr Minasi and Ras Moshe – melodic lines and chords made up closely adjacent notes – are built up in overlapping layers. There is still a sense of sculpted sound, but the combination of voice, guitar and tenor saxophone timbres is often radiantly beautiful, suggesting something bejewelled and glowing.