Among the greatest and most life-affirming aspects of the culture of the United States of America is that part of it which came from the Black American; the erstwhile African slave, who had created an unique code of communication – the call and response of the Blues – which later informed and developed into his expression of the joyous, uplifting feeling of secret freedom in the after- hours; that thing called “Jazz”. Apocryphally-speaking it all seemed to come together in Congo Square, then spread to Storyville, New Orleans and beyond; its irresistible fever caught like a pandemic across the United States and from there to the rest of the world in a matter of just hundred and some years ago. And long even after its magical melodies and rhythms seduced all manner of men who inhabited the earth – metamorphosing in many wondrous ways as it collided with the earth’s vast and seemingly limitless cultural topography it has remained in a very elemental sense the music of the Black American who has and continues to inhabit New Orleans. 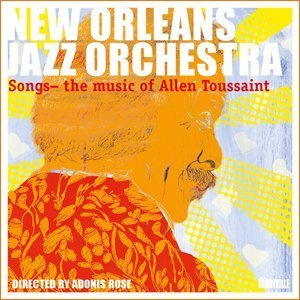 The ghosts of Buddy Bolden, King Oliver, Louis Armstrong, Sidney Bechet, Paul Barbarin, Alphonse Picou, Alcide “Slow Drag” Pavageau, George Lewis, Jelly Roll Morton and the other great ancestors of Jazz such as Danny Barker, Allen Toussaint and Dr. John continue to enflame The Music thanks to the important work being done by the current musicians of New Orleans. Musicians from Dr. Michael White and Irma Thomas to those of the Marsalis Dynasty; men like The Neville Brothers, Wycliffe Gordon continue to be happily haunted by all those now-sacred souls past. And with almost half a million faithful having descended on the city of New Orleans for the 50th Annual New Orleans Jazz Festival (between April and May, 2019) the impulse to celebrate is growing stronger. On this remarkable recording Songs – The Music of Allen Toussaint the revered New Orleans Jazz Orchestra directed by drummer Adonis Rose pay homage to one of the city’s most iconic sons; a pianist and composer who recently ascended to the heavenly realm, but left behind a rich legacy of music that continues to be grist for the grinding of generations of young musicians seduced by the Music of Jazz.

Seldom does a Jazz orchestral programme (with poignant and joyful vocals mixed in) hang together so perfectly, each successive work in this repertoire tightening the ratchet of intensity towards the proverbial final burst of explosive energy on “Tequila” with which the recording ends. It helps that all of the performers – Adonis Rose, who creates and directs the rippling Jazz groove along with the masterful musicians who are all at the top of their powers and who’ve interiorised Mr Toussaint’s music perfectly. SO much so that they seem to effortlessly swing their way through the technical challenges – and there certainly are some through “Ruler of My Heart”, “Gert Town” and “Zimple Street” – producing a tight and sweet unity of purpose, aided by a close recorded balance. Not only Mr Rose, but also the incomparable vocalist Dee Dee Bridgewater together with Phillip Manuel and Gerald French; as well as individual instrumentalists – some of whom, such as trombonist Michael Watson, tenor saxophonist Ed Peterson, alto saxophonist Jeronne Ansari and trumpeter Ashlin Parker, play solos – and ensemble player shine throughout the glorious repertoire.

Rarely has one recording sustained energy and excellence through to its entirety, but this one does and it’s thanks to the fact that it features not just Mr Toussaint’s music, but that too beautifully crafted arrangements of beguiling variety and sensuousness, in every lovingly phrase, sculpted through long and sustained inventions and improvisations. It’s simply an album to die for…