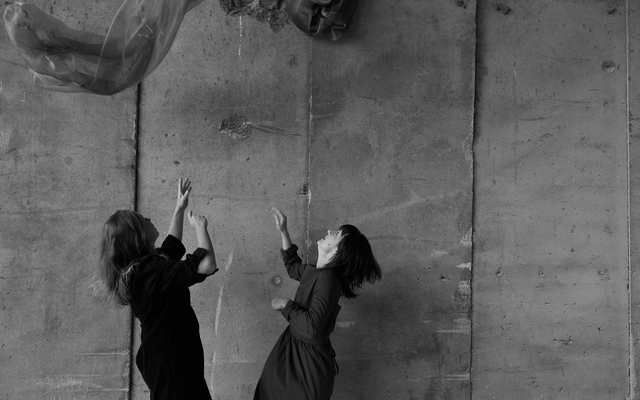 One has always known that a piano in the right pair of hands could all but supplant a symphonic orchestra. Pianists down the ages from Chopin, Liszt and Rachmaninoff to Rubinstein, Richter, Van Cliburn, Glenn Gould and Martha Argerich have proved that. More to the point of this album Pétrole, though, the prodigious Labèque sisters, Katia and Marielle have often proved that each section of the orchestra can often pale into insignificance when pianists such as them take over the landscape of the instrument together.

Perhaps the suggestion of a piano duo such as the Labèque sisters is a tad unfair in the instance of Nathalie Darche and Carine Llobet, who seemingly on the seven pieces of Pétrole, have found adaptations of works by contemporary composers that can (finally) show off their technique appropriate to its individual genius for not only do the works sing anew, but seem to come alive – with black dots flying off the manuscripts

and leaping into the air like Apollo’s Angels, pirouetting as madly as Vaslav Nijinsky dancing Scheherazade and Petrushka and something equally ingenious with Mathilde Kschessinskaya, Anna Pavlovna Pavlova, or Tamara Platonovna Karsavina.

However, more to the point, it is Alban Darche’s three-movement “Pétrole” and six other equally viscous works by Geoffroy Tamisier, David Chevallier, Baptiste Trotignon, John Hollenbeck, Mathias Reügg and Victor Michaud that pours forth from the magical fingers of M. Darche and M. Llobet like torrential rivers of ebony and ivory. In the phenomenal performances of M. Darche and M. Llobet, consummate performers in every respect, all of the heroic characters of Johann Wolfgang von Goethe’s Faust seem to come alive – Heinrich Faust, Mephistopheles and Gretchen – all rolled into one. And it’s not just in the central work of Pétrole; it’s everywhere else too.

Baptiste Trotignon’s darkly beautiful “In petroleum veritas” both pianists render electrifying and highly passionate accounts of the material giving the twists and turns of the melodic plot a particularly radiant glow. Earlier, David Chevallier’s “Speed” is grand – even spectacular – and in its closing measures the music simply tears off the page. Elsewhere, in the whimsical and deceptively simple movements of Victor Michaud’s “Derrick” both M. Darche’s and M. Llobet’s fingerwork displays a steely energy to it, which is altogether memorable.

And so it is that we come to the end of a remarkable disc by two pianists who not only have the technical prowess to deal with the pyrotechnics of the music, but to also enter the introspective core of everything from “Les pensées offshore d’Arthur” to “Derrick”. An album like no other… one to absolutely die for…