Myriam Alter has composed a healthy number of works after she resumed playing the piano among them these eleven pieces for the accordion of Luciano Biondini as the lead voice. Ms. Alter seems to favour the accordion for its bittersweet tone colours and has worked on several projects with Dino Saluzzi whose accordion has also served her well. Myriam Alter was raised in a Judeo-Spanish family and draws on her Sephardic Jewish tradition to create these melancholic pieces that can be the cause of a monumental twist in the heart of the listener. As can be heard on Cross Ways her winning 2015 disc Myriam Alter is a first-rate craftswoman who knew the genre intimately – she is also a skilled pianist – and how to create cogent instrumental dramas. 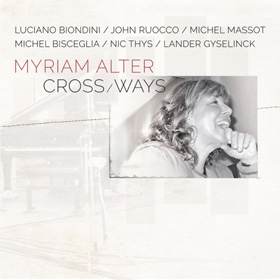 These eleven pieces relatively short, the longest running just over 6 minute. Each piece contains volumes of content – arresting thematic material, vigorous rhythmic ideas – within their brief spans while never sounding short-winded. The style could be called neo-classical; Myriam Alter received a solid grounding in classical music from the age of 8years and the music appears to have left a profound effect on her psyche. Elements of Schumann and Brahms inform her music when it is at its bleakest. The harmonic language is largely tonal, with the occasional presence of pungency as lines layer and criss-cross. Each of her songs always turns into something entirely original and thrilling and could safely be described as the poetry of sound. There is also a sense that much of the inspiration is deeply personal and when feelings are gut wrenchingly described, you may be left feeling like an interloper.

The music leans towards seriousness and brooding lyricism as well, the latter present in the many beautiful slow movements (adagio might seem to be a favourite Alter marking. A welcome hint of folk arrives at the finale of Dancing With Tango. Whatever Myriam Alter writes, the unfolding of musical event engages the ear and often speaks in a warm voice. Crossways especially, lives up to its iconoclastic name by championing journeys into beguiling repertoire. Thus it pays to pay close attention to each of the songs and where their emotions take you. The musicians play Ms Alters’ music with potent attack, flexibility and poetic ardour, giving full life to the varied moods and intricate gestures. Ms Alter makes it all worthwhile with No Room To Laugh, a beautiful solo piece dedicated to the great Mal Waldron.

Now that this group led by Myriam Alter have recorded this material it may be soon time to seek a follow up to this breathtaking music by returning soon to the studio for an encore.

Track List: Again; No Man’s Land; Inviting You; Weird Mood; Dancing With Tango; Back To Dance; Don’t Worry; How Life Can Be; Above All; Crossways; No Room To Laugh.

Myriam Alter received classical music training starting from the age of 8. Being very involved with her studies (graduating from high school, then getting a licence for psychology at the University of Brussels), she stopped practising her instrument at the age of 15. After her studies first she worked in an advertising agency for seven years. Then, without really being aware of it, she returned to the search of music by opening a dancing school which she managed for another seven years. At 36 she picked up her instrument again and soon discovered her skills as a brilliant composer with an individual approach to romantic moods. Read more…