Home Music Myra Melford Trio: Alive In The House Of Saints Part 1
This disc Alive In The House Of Saints was recorded at The Club in Germany, in 1993 and it ought to be listened to in the context of its vintage not because of its vintage, but in spite of it as its protagonist, the pianist Myra Melford is a restless and chameleonic innovator and almost mythically like a twelve-tone row is never in the same place twice. Not that her music is a living embodiment of that of Shostakovich, and not that she subscribes to his theories and practice in music either. However, it is the very aspect; the principle that Miss Melford is rarely – in fact, almost never – in the same place twice is what gives her an unique musicality. That and the fact that she also seems to have been raised to music with an irrepressible and questioning mind is what makes he one of the most individually fascinating musical minds of her generation.

The work of Myra Melford first appeared on disc in 1990, which makes the music on this disc something she created barely three years into her recording career. Although it shows some doffing of the proverbial hat to an early influence and teacher, Don Pullen, Miss Melford already announces her arrival in a voice clearly her own. Each of the songs here develops either from seemingly visual themes, such as is “Evening Might Still” 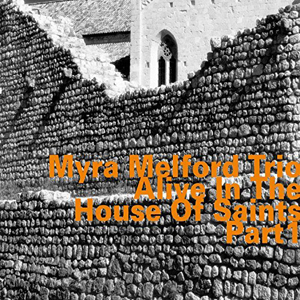 (a wonderful play on the form and function of a still life) and “Parts I & II Frank Lloyd Wright Goes West To Rest” (with poetic inner rhymes in the title itself) and narratives like “Now & Now 1” and “Between Now & Then”.

Each work is of a perfect set that rests solidly on a sort of symphonic pianism, characterised by an emotional directness devoid of sentimentality, and by a constant search for clarity of line and ‘orchestral’ texture (within the constraint of the trio of bass and drums, of course). This puts a huge load on Miss Melford’s pianism, which she handles – more than stoicism – relative aplomb, spinning out long lines of melody that build into complex yet clearly defined contrapuntal melees. Her furious fist-rolling on the keyboard – a Don Pullen-like inheritance – is superbly affecting and often signals that the fullest extent of keyboard skills is about to be unleashed through thunder and lightning and a blaze of energy.

The highly-energised counterpoint between the piano of Myra Melford and Lindsey Horner’s bass – glued together by unfettered rhythm by Reggie Nicholson’s drums – heralds the scintillating and inexorable pushing forward of music beyond its logical bounds. The music – as the disc progresses – becomes increasingly luxuriant culminating in an intense burst of improvisations with almost spiritual grandiloquence.