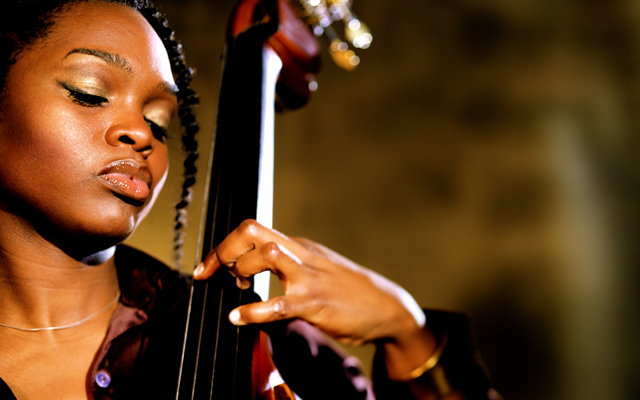 The reference to ‘mud’ represents a stasis that is antithetical to the very nature of Jazz. However, just as you cannot describe ‘black’ without describing ‘white’ the bassist Mimi Jones describes the wings of freedom by painting a picture of its very antithesis: feet stuck in the mud. In doing so, Jones has arguably come up with a leading contender for Album of the Year. A lot can happen going forward, of course, but it is hardly likely that you will hear twelve tracks that address the question of the elasticity of this great music played with such intellect and intuition; with such passion and power. And, yes, I do suggest that Jones plays the double bass the old-fashioned way: articulation like a vocalist negotiating an aria, or – put another way – swinging madly, like Jimmy Blanton, Oscar Pettiford, Charles Mingus or Ray Brown reborn in the heart of Mimi Jones. 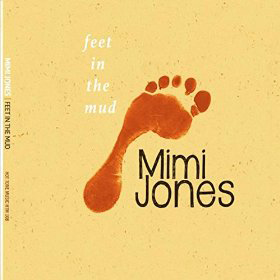 Having marvelled at A New Day and Balance I find myself ever more in awe at this musician bristling with talent, for this music, in particular as she adds her silky-toned voice to the musical mix. Your first experience of Jones’ soaring bass-and-voice flights comes early in the album, with ‘American’ a sultry song that explores the mystical impression of the Spiritual on Jazz. Allowing both idioms to breathe freely, she conjures up the essence of the very elemental fire of African-American music itself. With music that generates so much heat it is impossible not to be scorched by the musicianship of someone who is not only deeply rooted in the tradition, but one who is also not afraid to break a rule or two when the need arises. ‘The-Min-Or Way’ is a beautiful example of that iconoclastic spirit borne out by a song that re-imagines the influence of Monk, Mingus and Ornette in a brand new, angular and meaningful way. Another example of ingenious writing is Mimi Jones’ excellent take on the Beatles ‘Blackbird’ which is made wholly new on this recording.

Much of the magic of this recording comes from the players who make up this small, but dynamic band. In this regard, Jon Cowherd is plays the guiding spirit with his steady and, at times, wildly inventive hand at the keyboards. This enables Mimi Jones to roam unfettered across the multi-coloured musical topography of this album. Her often restless spirit is pursued by a musical soulmate – Samir Zarif, who is the other star on the each of the tracks he is called upon to play. Listening to the percussion colourist, Jonathan Barber is just as rewarding. But Mimi Jones remains the main attraction, a bassist who combines the tantalising tone of a snake-charmer with the attack of the snake itself. Add to that the fact that we also hear Mimi Jones the Vocalist and while she may be a late arrival to this bass-and-vocals party, she has certainly succeeded in prying heads away from those bassists who may have lit up this scene earlier.

Music education being what it is today enables many who pursue it to find their composer’s voice, often early in their careers. But to find someone who can relate to Jazz standards as folk traditions is so much more rewarding. This is exactly how much more musicians such as Mimi Jones bring to the banquet. Not only is there an emphasis on the thrumming bass lines of the music on this album, but you also have a sense that here is a writer that is onto something special. And that means being able not only to plant chords into the right rhythmic structure of pieces, but to write melodically and idiomatically for various instruments as Mimi Jones shows here. This is architectural music of the highest degree, written and played by a bassist to watch.