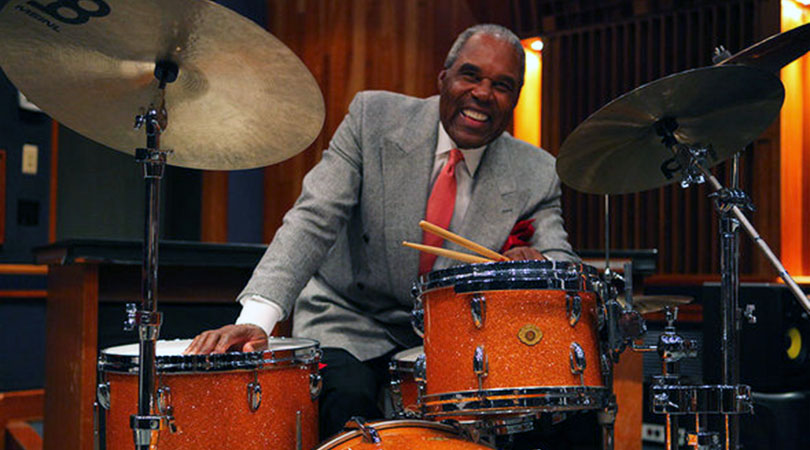 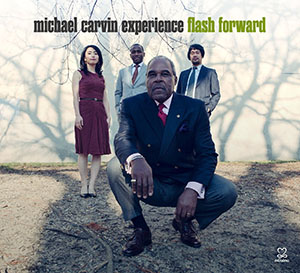 With this brand new band, drummer Michael Carvin is breaking his silence after some time. The drummer has been part of many illustrious ensembles and has given a fantastic account of himself. His energy is primordial and visceral. In that respect he follows the line that comes down from Papa Jo Jones, Max Roach and Roy Haynes. When he plays he seems to have more than two hands and more than two legs and feet. Such is his speed and virtuosity. In this respect he seems to be like the great Elvin Jones, who displayed similar polyrhythmic virtuosity in the famous John Coltrane Quartet. But Michael Carvin is his own man, a drummer with a singular voice who combines rhythmic intensity with melodic delicacy and surprise. This thrilling aspect of his playing was heard years ago when he recorded with the wonderful Japanese trumpeter, Terumasa Hino, with whom he recorded at least two albums, also touring with him to Europe. But now he has his own brand new band, the Michael Carvin Experience, a band he is so proud of that he says Flash Forward is his best work.

This might well be. On this album, the experience of Mr. Carvin’s playing is heightened. With his flying hands and feet, he appears to mimic the movements of Thelonious Monk, who seemed to dance while he played. Michael Carvin gives the impression that he is doing likewise, for even though it is not possible to see, it is possible to visualise a kind of drummers’ shuffle that is going on by merely following what he is doing on the high-hat and with the bass drums as he drops the occasional, but rhythmic depth bomb. And then there is the flying of hands seeming to jump and bop from glittering and singing cymbal to snare and tom-tom. His sticks rattle and hum as the cymbals crinkle and the high-hat chomps on the best and the back beat of the music he is playing. Keith Loftis often acts the way Mr. Monk’s tenor saxophonist Charlie Rouse did, underlining Monk’s driven phrases with a monstrous, hot and dry tone, like a blast of the Santa Ana wind. He does play a chart well-known in the playbook of the mighty Mr. Monk, “In Walked Bud,” and although the pace of the song is picked up considerably its chopped idiom is distinctly Mr. Monk’s. It is here that Michael Carvin shows his chops. His solo is melodious, frighteningly rhythmic and fierce as he glorifies both, the melody, the harmonics and the rhythm of the chart.

Another chart where Mr. Carvin and Keith Loftis excel is the classic, “Night in Tunisia,” where both men seem to rewrite the classic making it quite their own. But Mr. Carvin and Mr. Loftis are not the only heroes of this expedition. The young Japanese pianist Yayoi Ikawa and the bassist Jansen Cinco deliver outstanding performances as well. The pianist Ms. Yayoi is brilliant on “Sayonara Blues” among other things and both pianist and bassist are profoundly intense on the melancholic and turbulent “Same Shame” and on “You Stepped out of a Dream.” But it is the group guided by the experience and the genius of Michael Carvin that puts its stamp on each of the charts, especially on “Autumn Leaves,” a beautiful way to bring this memorable session to a close.

Track List: So What; Sayonara Blues; In Walked Bud; Same Shame; Night in Tunisia; You Go to My Head; You Stepped out of a Dream; Autumn Leaves.

Born in Houston, Texas, Carvin’s musical training began at age six with his father, one of the top drummers in Houston. By the age of twelve, Carvin began playing professionally and won what would be the first of five consecutive Texas rudimental championships. Mr. Carvin’s diverse career has included two years as a staff drummer with Motown Records and extensive studio and television work on the West Coast. Joining Freddie Hubbard’s band in 1973, Mr. Carvin moved to New York where he quickly gained a reputation as one of the most formidable drummers on the jazz scene. A prime example of his work with Hubbard can be seen on the Mosaic Records/Jazz Icons DVD released in fall 2011 featuring Carvin with Hubbard’s very first touring group. In addition to leading his own bands, Carvin’s vast playing and recording experience includes work with Dizzy Gillespie, Dexter Gordon, Jackie McLean, Hank Jones, McCoy Tyner, Illinois Jacquet, Pharoah Sanders, Bobby Hutcherson, James Moody, Hampton Hawes, Ruth Brown, Johnny Hartman, Abbey Lincoln, Jimmy Smith, Hugh Masekela, Alice Coltrane, Cecil Taylor, Charles Brown, Terumasa Hino, Bobby Watson, Billy Bang, and many others.