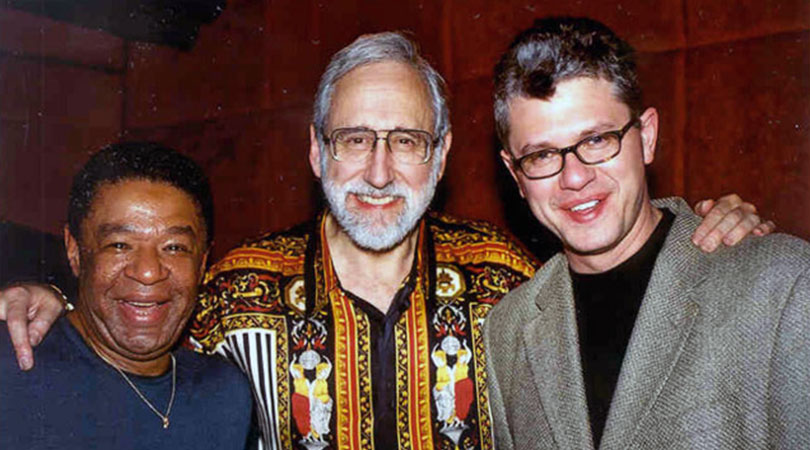 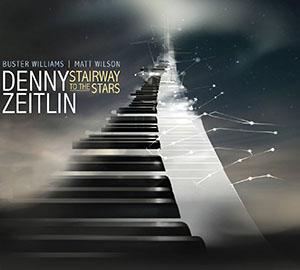 There is almost no one musician playing today who can deconstruct a standard and then put it back together again like Denny Zeitlin. On his breathtaking album, Stairway to the Stars he does just that, leaving members of his audience gasping for breath. As Mr. Zeitlin starts to play a chart it is not improbable and often through the program, some of his listeners will catch themselves thinking, “Wait a minute, I know this one… Oh! No, it cannot be,” and then as the song unfurls, “By Jove, it is!” And then again another chart will be unrecognisable until somewhere in the middle or someplace else, when the secret is out. This is almost always the case on Stairway to the Stars and it is almost as exquisite to be a part of this experience. Mr. Zeitlin literally owns the piano and commands it to do his bidding when he sits down to play. Long and supple fingers make weighted keys, anchored by taut strings opened and closed by sustaining pedal and a soft one, seem malleable and ductile. Of course they are not, but then Mr. Zeitlin varying pressure to the same key to make a note emote differently in a single line as if it were a nerve ending itself, carrying a synapse to the brain. Few pianists in any idiom of music can play like Denny Zeitlin. He is almost without parallel in jazz and the equal of any musician in the classical realm as well. In another era, the Romans attending a performance might have said: “Poeta nascitur non fit, “the poet is born, not made.”

Whenever a new record of songs from the Great American Songbook is made it is tempting to ask: Why do another record? All too often the answer is obvious and equally frequently the music is dull. But this can never be said of anything that Denny Zeitlin does. Not long ago he made a record called Both/And (Sunnyside, 2013). The album was sub-titled Solo Electro-Acoustic Adventures. Surely the music would be dated? Not unusually, a question arose: Had not Miles Davis been there before; or Joe Zawinul? But then the record began to play and Mr. Zeitlin’s particular genius began to unfold. Soon the music began to sound like almost nothing ever played before. And so it is with Stairway to the Stars as well. The recording is worthy of being judged to be a masterpiece. However, although every song on the album is sublimely crafted three songs stand out like sentinels guarding the reputation of this recording. The first is “You don’t know what love is.” Played in a minor key this song is dark and despondent. The character is lamenting a relationship that is flawed because (and it is nice to think of this character as a woman) her lover is bereft of feelings related to love. She sings to your heart, not your ears. The second song is Sonny Rollins’ bebop classic, based on the changes of George Gershwin’s “I got rhythm,” a rollicking mindbender for any musician who plays an instrument—a tongue-twisted for a reeds and woodwinds player, a finger snapper for a pianist and so on. The third is “Deluge” a composition by one of the most ingenious composer and musician in this post-bop era, Wayne Shorter. Mr. Shorter’s melodies are beautifully abstract, like Kandinsky paintings and often they unfold like the famous cubist painting, “Woman ascending the stairs” with layer upon layer of woman—in Mr. Shorter’s composition, layer upon layer of melodic surprise.

Denny Zeitlin plays each of these tunes with genius supplanting the complex characterisation and imagery of each with sonic magic. His pianism is echoed by the brilliance, of course, of bassist Buster Williams and the percussion colouring of drummer Matt Wilson. Although it is Denny Zeitlin calling the shots, each of the musicians make their own magical way through the compositions. This is what makes them sound particularly alluring. The latter composition, “Deluge” has a masterly introduction by Buster Williams. But make no mistake, the director of it all is Mr. Zeitlin, who has arranged and produced the recording making this one of his most exciting and memorable recording to date. Much of this has to do with the manner in which he approaches standards—with a frame of mind bordering on irreverent so that the music gets to become something it is and is not. Mr. Zeitlin always reshapes the songs, sometimes rhythmically, when he is feeling puckish. Or sometimes he recasts the drama and the manner in which the dramatis personae interact. This is probably why these three songs—and indeed all the others—stand out on a recording unsurpassed by most of the recordings in 2014 so far.

Track List: There will never be another you; You don’t know what love is; I could have told you; Oleo; Stairway to the stars; I’ll take romance; Bass prelude to Deluge; Deluge; Spring is here; Out for a stroll.