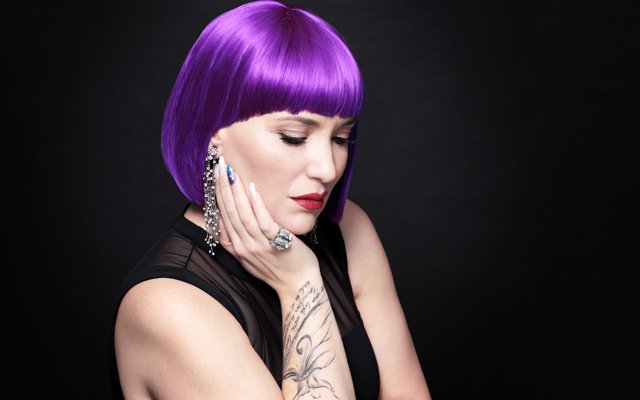 Melbreeze and her music is as striking as the preponderance of purple in her look for this reimagining of standards and pop songs, entitled Amethyst. The Smyrna-born Turkish vocalist evokes the dark opulence of Grace Jones and the wild and misty naissance of Björk but renders music in a singular voice that is characterized by sultry, stabbing vocalastics that makes each song a completely new creation. Even critics driven by a kind of hard-nosed conservatism would be bewitched by her genre-defying style; one that borrows from Berlin-chic art song, opera and Jazz with generous helpings of punk and noise music. She seems to be saying with every song: “Throw out what you’ve ever imagined vocal music to be and listen to my songs. 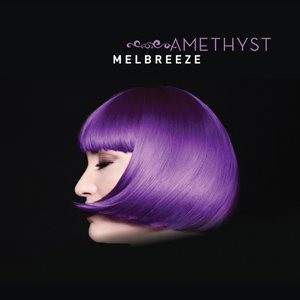 The test of whether she is as convincing emotionally as she is stylistically is ultimately won in these moody renditions of classic repertoire. Some of this has to do with the imagination of producer and bassist Jimmy Haslip together with arranger Scott Kinsey. Theirs is a vision that is born of Melbreeze’s soaring artistry. In these songs, although Melbreeze’s style borders on adopting an almost neon interpretation of the characters in these songs she nevertheless nails the emotions of joy and sorrow even as she twists the melodies in a diabolically new and stunningly original manner. As if her breathtakingly versions of “God Bless The Child” and “Cry Me A River” are not enough, we are treated to a dazzling version of Stephen Sondheim’s “Send In The Clowns”, complete with a yammering vocal introduction and rippling percussion colours by Arto Tunçboyaciyan, followed by wailing guitar by Oz Noy.

The effect of this music must surely recall what initial reactions to the kind of thing that someone like John Coltrane must have created when he recast the safe melodicism of “My Favourite Things” into an artifice of his own making. Melbreeze’s contribution to that kind of iconoclasm is her version of “Greensleeves”. To some it may be a kind of irreverent casting of an almost sacred melody, but then you may recall Lerner and Lowe’s reaction to “My Favourite Things” after Mr Coltrane re-imagined a song written from the safety of a bright sun-room from looking into the bluesy ink-dark precipice of a Jazz musician whose perspective on his favourite things must surely been from a darker place than Fräulein Maria von Trapp. The tumbling percussive groove of “Hallelujah” becomes the bedrock of the masterfully re-constructed Leonard Cohen song. An album to die for even if it isn’t for the faint-hearted…