Home Music Meg Okura and her Music of Motherhood and Exodus

The big canvas has enormous appeal for Meg Okura. She gave notice of this a long time ago. Miss Okura has been drawn to things of historical significance both in art and in life and that has to do with being born Japanese and then being reborn in the Jewish faith. Anyone who knows something – even a little – about both will know that you simply cannot exist without an eye on the big picture because both Japan and the Jewish Diaspora share not only ancient histories, but draw their own into these histories to discover them and abide in them with passion. To her life in spent in these twin realms, Miss Okura also adds an utter honesty to her human existence that foams over into her art – her music – and, indeed her deep understanding and empathy of all art.

Moreover, she is blessed with a multi-dimensional character, like that of a polymath, so that her response to the call to create is as deep and wide as the whole of human history. One has only to recall any album she has made to be immediately struck not only by all of this but also by the impressive reading of and response to what the myriad histories of West, East, Africa and the Middle East. Her monumental interpretation of John Coltrane’s “Naima”, and other works on the (2009) album of the same name and the breathtaking interpretation of the Music of Ryuichi Sakamoto (2012), the legendary composer, known for his epic film scores, both of which were record with the Pan Asian Chamber Jazz Ensemble, are just two impressive testaments to her astounding artistry.

And now Miss Okura has released two more recordings; one is a trio disc that is made up of programmatic work and free improvisations and the other a stunning series of pieces that have been inspired by motherhood, her Japanese heritage and the spiritual wonders of a Judaic nature that have magically been melded into music that also reflective of the mysteries and paradigms of Buddhism. The music is meditative and unravels in Miss Okura’s violin, redolent of mighty double, triple and quadruple stops, played pizzicato and con arco, punctuated by string-plucking, nail sizzle and other miraculous percussive devices that tell stories, some of which can be epic in nature as well as startle like epigrammatic Zen koans. 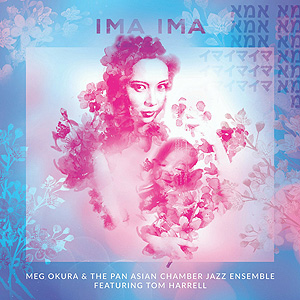 Meg Okura & The Pan Asian Chamber Jazz Ensemble – featuring Tom Harrell: Ima Ima The Pan Asian Chamber Jazz Ensemble have been playing Miss Okura’s music for some time now, and have recently come off recording an extraordinary pastoral work “Lu Chai” on the album Naima. Miss Okura and her ensemble follow this up with the more intimate work that looks at the difficulties and joys of motherhood in the bigger context of Judaic spirituality. Both relatively new for Miss Okura at the time they happened to her, the understanding and subsequent artistic response is, nevertheless, extremely discerning and remarkably erudite. This is brilliantly at work on “Black Rain”, a response to the horrors and prospect of nuclear war.

Coming from a spiritual reaction to both her faith and humanity, Miss Okura’s music has a muted serenity that is reflected in her own violin playing, which is complemented by the flute of Anne Drummond, the soprano saxophone of Sam Newsome and the ravishing harp of Riza Printup. But it is the inspired work of Tom Harrell on trumpet and flugelhorn that takes ones breath away. The music here is a compliment to Miss Okura’s private devotion and soars on “A Night Insomnia”. An obsessive perfectionist Miss Okura polishes this – and the other works in the repertoire – into gleaming gems. Her playing – unlike many of her flamboyant contemporaries – is never flashy; ornamentation is tempered by gravitas.

The members of the Pan Asian Chamber Jazz Ensemble also parley with the familiarity of old friends, yet their playing always retains that sense of gracious etiquette associated with the noble music academies where chamber music of this kind once abounded. Nothing is forced or exaggerated or overly mannered despite the profound meaning and emotion – spiritual and secular – that this music is meant to convey. Tempos, ensemble and balance, all seem effortless and intuitively right. The bright guitar sound of Rez Abbasi and the doleful clarinet and bass of Sam Sadigursky are both lucid and warm. These are, in sum, wonderfully poised accounts of Miss Okura’s epic music which is captured with a brilliant acoustic by Marc Urselli. 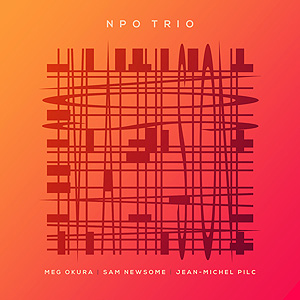 NOP Trio: Live at The Stone Meg Okura’s spiritual, often prophetic and always cathartic vision is shaped by her deeply-felt understanding of World War II, which may have been – for her – a generation ago – but is nevertheless deeply ingrained in post-war Japanese culture and will probably remain for the life of that country and culture. Having been accepted into the Jewish faith it is no surprise that her profound understanding of the Diaspora and its heroic journey into Israel is at the emotional heart of all of her work. As a violinist Miss Okura is one of the outstanding lyric talents of our time and on this recording she is especially impressive as she pools her improvisational gifts with those of two other giants: Sam Newsome on soprano saxophone and the pianist Jean-Michel Pilc.

The journey of the trio on this recording reflects a kind of symphony of sorrowful and joyful songs. Mr Newsome and Mr Pilc, no doubt at the prompting of Miss Okura, have been inspired to draw on the overlapping Yiddish melody “Ofyn Pripetchik” by Mark Warshawsky. Songs well up from this beautiful melody, developing like a ghostly canon for violin until the music becomes enshrined in a bell-like figure from Mr Pilc’s piano, which in turn, becomes interlaced with its third partner, ushered in as a “singing” soprano saxophone. The contrast between the beauty of these varied sounds and the profound fear and anticipation of the story they are telling intensifies with each song, the listener clinging for comfort to each instrument as the music unfolds.

The impact of this music is an overwhelming one. Texture is everything; the breathtaking silences in between pieces is punctuated by a series of great gulps of air in breathless expectation on the part of the listener who anticipates each great crescendo that leads to the ultimate dénouement of the free improvised works. Each work is also built on harmonic clusters – chords made up of closely adjacent notes – that are built up gradually in overlapping layers. There is still a sense of sculpted sound but the combination of instrumental timbres is often radiantly beautiful, suggesting – at all times – the arrival of something bejewelled and glowing.