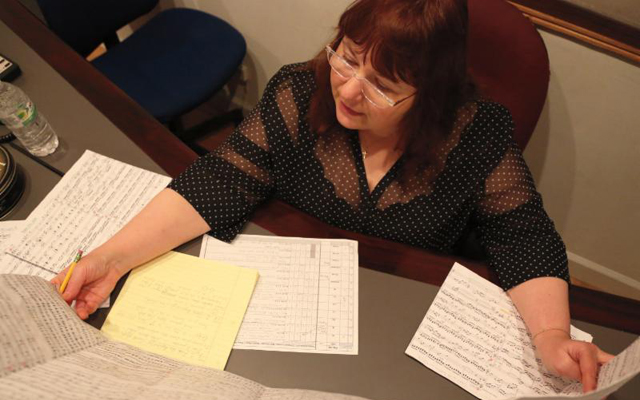 Yelena Eckemoff – like many artists enthralled by Biblical scripture – find themselves attracted to the Psalms – lyrical songs in praise of and addressed to the God of the Universe. The Psalms – together with The Song of Solomon – is one of two poetic works that have been included in the library of the Bible. Few books have been more inspirational to poets than The Psalms and The Song of Songs throughout the ages, firing up the work of the 10th century Hebrew poet Shmuel, “The David of (his) age”, great mystics such as Ibn Hazm of Niebla, Spain, Judah Halevi, the pillar of the Andalusian Jewish community, and the Sufis. Moreover, anyone familiar with the oeuvre of Miss Eckemoff will recall that there is a profound meditative quality to her music (even music in the recent past of her repertoire). So in a sense the arrival of this recording Better than Gold and Silver is not entirely unexpected. However, that this music – all of which is breathtakingly original is so filled with and once you’ve heard it even once the Miss Eckemoff’s interpretation of these Psalms (six in all) is startling; her interpretations of each is – quite stunningly – authentic in that she captures the utter simplicity of their ancient creators making these works at once old and new so much so that it is safe to say they will become part of the continuum of spiritual music even if the form of their creation is indeed of a secular nature. 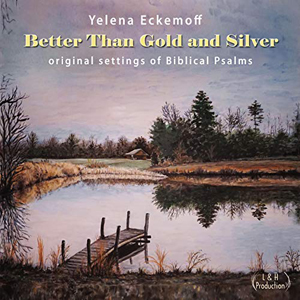 In a sense guiding principle of this music is vividly reminiscent of the Stylus Phantasticus that was first spoken of by Athanasius Kircher’s Musurgia universalis a (1650) treatise on harmony in music that derived from phantasiren or “the art of improvising”. Evolving out of that Stylus Phantasticus of that era, Miss Eckemoff’s music also seems to represent a form of liberty in the composition of instrumental (and here, vocal music too) and does not attempt to confine the composer’s imagination or force it to abide by strict rules; in her case, of course, because Miss Eckemoff abides by the guiding principles of Jazz improvisation. This is another way to appreciate the extraordinary erudition of Miss Eckemoff’s music. And it provides a kind of road map for us to re-approach all of Miss Eckemoff’s music as it arrives at this point, which is her highly successful attempt to score these six Psalms in her unique style of (writing) secular music.

The title of this album Better than Gold and Silver comes from the “Teth” sequence of “Psalm 119” – the ninth set of stanzas of the Psalm where the psalmist praises The Lord thus: “The Law of thy mouth is< .em> better unto me/Than thousands of gold and silver.” This is not only the centrepiece of this two-disc set, but it is also one of the principal Psalms of the Biblical Psalter. Bishop A. F Kirkpatrick, Dean of Ely in The Book of Psalms (Cambridge University Press, 1902) reckons that this is the “great ‘Psalm of the Law’, based upon the prophetic (Ezra ix. II) presentation of the Law in the Book of Deuteronomy, with the spirit and language of which the author’s mind was saturated”. Mr Kirkpatrick’s description of that Psalm seems a perfect characterisation of Miss Eckemoff’s own interpretations on Better than Gold and Silver. Certainly Miss Eckemoff’s efforts as she lays out in the booklet notes follow her heartfelt and extraordinarily personal account of her journey out not only out of Soviet rule, but also into spirituality.

Miss Eckemoff’s musical setting of these Psalms – both in the vocal renditions and the instrumental ones – succeeds magnificently. The music here suggests that she as arrived at the pinnacle of her creative musicianship which is born of the great Russian Romantic tradition which reached its own apex with The Five, five prominent Russian composers who worked together to create distinct Russian classical music. Mily Balakirev, César Cui, Modest Mussorgsky, Nikolai Rimsky-Korsakov and Alexander Borodin who all lived in Saint Petersburg, and collaborated from 1856 to 1870. Although Miss Eckemoff has always adopted a Jazz-centred approach to improvisation, in a sense her music has seemed to belong principally to the vivid palette of that indelible canvas. And in this regard she is supremely alone among all of her contemporaries – irrespective of cultural background – who rely on that Jazz-centred approach to music. It is exactly this aspect of her music that makes the music of these Psalms incandescent, profoundly human and intoxicating in their celebration of The Divine not only in the abject fervour, but also – the Spirit of The Psalms – in their lyricism as well.

What makes this highly personal interpretation appealing even as the Psalms are placed in a whimsical sequence – even truncated in the case of “Psalm 119”, is certainly the choice of the Psalms, which if followed in conjunction with Miss Eckemoff’s notes, becomes clear in the context of the Eckemoff’s search for existential meaning in the historic collapse of the only ideology they knew growing up in the erstwhile Soviet Union, which again is reminiscent of a kind of Dostoyevsky-like struggle with his conscience that led to his works like Crime and Punishment; and there are parallels in the turmoil of Miss Eckemoff’s music also with perhaps even some of Nikolai Gogol’s writings. Miss Eckemoff’s music here focuses on the life-affirming qualities of the Psalms rather than their ceremonial aspects (both in the vocal and instrumental versions). There is a genuine urgency in “Psalm 131”the opening of which is beautifully shaped and paves the way for the rest of the repertoire right through to the infectious joyousness of “Psalm 147” with which the discs end.

The musicians who accompany Miss Eckemoff on this journey – like those on all of her previous ones – are unfailingly responsive to her vision and artistry. The use of Christian Howes on violin and Ben Monder on guitar, as well as Ralph Alessi on trumpet is inspired and they respond in exemplary fashion conjuring harp, lute and shofar while Drew Gress and Joey Baron’s work often calls to mind rumble of gravitas and echo of timbrel. Miss Eckemoff is captivating and her pianism mixes wild mystery with coruscating brilliance. This becomes especially important when Miss Eckemoff leads the musicians into a decidedly modern interpretation of the ancient worshipful music used by Psalmists, obviating the need for the listener to make teh proverbial “philosphical leap” when “imagining” the sentiment of the respective Psalms, so crucial to approaching Disc Two. The vocal versions of this music on Disc One has a beauty all its own. Much of this has to do, of course with the vocalists. There is also superb solo singing: Kim Mayo is radiant in every appearance throughout and Tomás Cruz’s tenor is both resonant and dramatically compelling. This is, in short, Miss Eckemoff at her finest on a disc to die for…