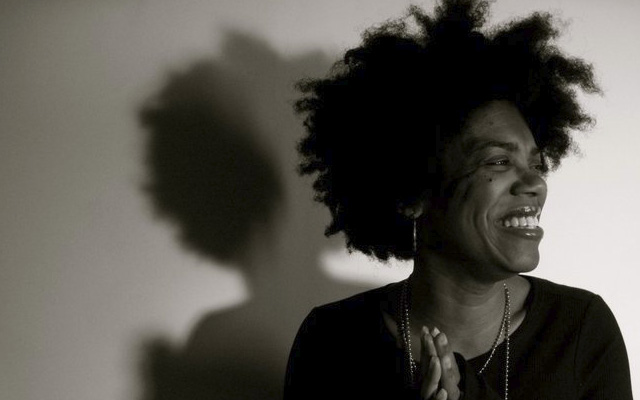 Forged in the indestructible forces of nature, a mere stone becomes a rare gem, the seemingly inescapable pain becoming its very transformative beauty. Such is the art of M’Balia’s blues, born of an elemental ache it gleams, black, beautiful and diamantine. A voice so naked and pristine in a soundless wilderness, seemingly alone with herself in the deep, dark night of emptiness, she feels the subtle currents of the blues passing through her, and pouring through this fragile existential flux into translucent images of suburban angst, analogues of self-inquiry. She infuses them with orange-coloured solitude. These are the songs that become peopled by characters in a drama created by the hallucinatory drama of her voice as they are bathed in the white light of her voice.

M’Balia Singley is one of those extremely rare events that happen to us once in a lifetime. You have to regard her artistry with the same reverence you once regarded her ancestors, their great names echoing in the rear-view mirror: Smith, Holliday, Fitzgerald, Vaughan, Lincoln. You still hear them, but can only utter them in hushed whispers. But M’Balia Singley is here and you need not keep that to yourself, but rather shout her name out from the rooftops. Why wouldn’t you? The joy of Singley’s blues and jazz is infectious. It gets under your skin, not surreptitiously, but with pomp and circumstance – the way all potentially great art does. Singley announces this in the grand manner on You Don’t Need & I Don’t Have and you are heaven bound from then on.

I mentioned ‘hallucinatory drama’ earlier because you often get a sense of being in in a modern-day Mother Courage witnessing battles of endurance to overcome trouble with joy in the elemental pain of the blues and the existential ebullience of jazz. The while the original Brecht play plodded along and great was its strain, M’Balia Singley’s lines fly past dazzling you with their sensuous darkness that lights up in the end as she twists end-notes with sinuous, seemingly endless tremolo. You are sorely tempted to make up the words ‘Jazz arias’ although Singley’s vocalastics has nothing even remotely to do with Western-style opera. This is pure African-American art and you can no longer resist its charms, so you fall under its spell.

The simple irony of the album Halfway There is not lost on the senses. Not the title of the record, or the song. When you listen to its words from this fully-formed vocalist you are left speechless. There is No Greater Love and That’s All have similar effects on the ear and the heart. You will not be remiss if you feel the sudden urge to listen to If I Were A Bell every now and then. Its joy is infectious. Or be washed over by the graceful beauty of Softly, As In A Morning Sunrise. But the catch in the throat comes with Duke Ellington’s Come Sunday… You think, Mahalia Jackson. And that is certainly not sacrilege.

It bears mention that the record has been produced by Orrin Evans, who also plays piano on it. Evans is quickly becoming a sought-after producer and his work with another Philadelphian, Joanna Pascale is also legendary. Add to that the heft of musicians – also of Philadelphia – Madison Rast, Mike Boone, Byron Landham, Gene Jackson, Lucas Carlos O’Reilly and Tim Motzer and you have a performance that is utterly irresistible. The ever-gifted M’Balia Singley has arrived.

Pursuing your dream can mean following a long and arduous road. Philadelphia-based vocalist M’Balia marks a significant landmark along that route with the release of her debut CD, Halfway There. Produced by pianist Orrin Evans, the album introduces a bold and fearless new voice, a singer willing to approach familiar standards from an adventurous perspective, and a songwriter with a caustic wit and piquant attitude born of lived experience. Read more…