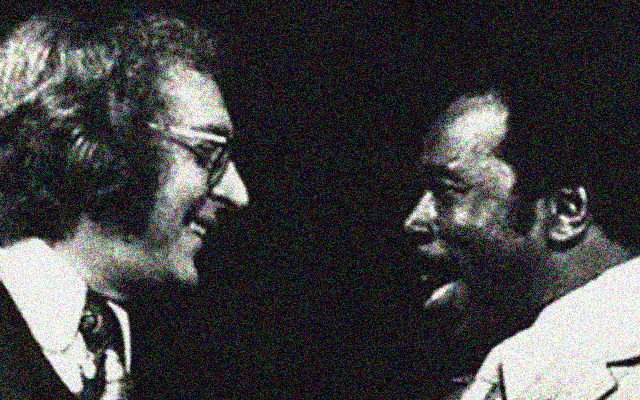 To begin at the beginning, this is the first recording of the Thad Jones/Mel Lewis Orchestra’s first gig and it is entitled All My Yesterdays. It was, at the producer of this release corrects, the first and only complete recording of the first two gigs by what was to become one of the most iconic big bands in jazz and it was made by one of the most fortunate men in the history of jazz – George Klabin, founder of Resonance Records. The story of how the recording came to be in Feldman’s notes in the superb booklet that accompanies this two-disc package so it does not pay to repeat it. But it bears mention that Klabin – the recording engineer – did yeoman work as a jazz-crazy young man (this one as a sophomore) at Columbia University in Manhattan. And it is one of those recordings that ranks up there with those done by Alan Lomax and by Dean Benedetti, but infinitely more sophisticatedly restored and engineered by Klabin and Fran Gala at Resonance.

Now for the music: The great Charles Mingus, who produced one of the seminal recordings of Thad Jones for his (Mingus’) legendary label, Debut famously referred to this middle son of the Pontiac, Michigan dynasty as “Bartok with valves” because of his trumpet playing. Mingus was known for being stingy with his praise, so what did this really mean? Consider Bartok: as a composer, he changed the sound of music in the 20th century, the breakdown of the diatonic system of harmony that had served composers for the past two hundred years during his generation. This may not have been necessary for Jones to do. Jazz was not as old as Bartok’s tradition of music; but certainly changed the course of the jazz continuum, a tradition to which he so intimately belonged. His compositions are not the only testament to that. His playing of the instrument reinforced the theory that Jones was one of a kind and the music – Disc 1 comprises some of his most beautiful compositions and some of his playing too. Disc 2 of this fine package comprises a few more of his compositions, but his trumpet and flugelhorn playing has a greater showcase there. 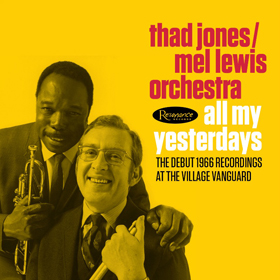 For an orchestra that was making its debut (at Max Gordon’s Village Vanguard) the musicians are surprisingly self-assured, ready to follow its conductor to wherever he would lead them. There is a visceral excitement – a palpable one – as soon as the band strikes up. The steady rhythmic clip of drummer and co-leader, Mel Lewis, joins Jones in setting the musical course and they’re off on an odyssey through the topography of Planet Jazz. The roar of the horns playing off the blitzkrieg of the woodwinds – accompanied by the sizzle and bop of Lewis’ drums and the deep rumble of Richard Davis’ bass – seemingly follow the whirling hands of Thad Jones to places that could only be dreamed of in music. You immediately feel the heave of the earth, the rush of blood to the cheeks as the dramatic tension of the music puts a riveting hold on the ear. The players turn the music of Jones in the February 7th 1966 set into a triumphant journey. The Big Dipper that became one of the most recognised examples of Jones’ penmanship is performed with utter brilliance. The longest charts on Disc 1 – Back Bone and My Little Pixie are brazenly alive throughout. Although Jones’ eldest brother, the brilliant pianist Hank is showcased through Thad Jones makes his first appearance on trumpet here. You are immediately struck by the uniqueness of “Bartok” with valves”. His sense of space and time, his tonal colours and ingenious use of the timbre of his instrument radical employment of harmonics become evident and you realise how right Charles Mingus was to reward him with that crown.

The happily burgeoning relationship with these musicians continues through Disc 2, a performance that Klabin recorded on February 21st 1966 set. There are marginal changes to the personnel in the orchestra. The fabulous Bob Brookmeyer is absent and the trumpets welcome Danny Stiles, while the fast-rising baritone saxophonist Pepper Adams holds up the bottom of the saxophone section. Adams has a brilliant solo on A Thad Jones original Once Around, while two more icons of jazz – saxophonists Joe Farrell and Eddie Daniels are showcased on Lover Man (Oh Where Can You Be), Don’t Ever Leave Me, and Mean What You Say and All My Yesterdays. Hank Jones is omnipresent and plays with great rhythm, clean articulation and phrasing which are affectionate and unfussy. And then there is Thad Jones who is considerably more visible as an instrumentalist showcasing with rigour and emotional extremism. His playing on Low Down is especially “symphonic” and seethes with tension and excitement. HIS control of the valves is majestic, powerful and tautly controlled. And what a way to end the set… with woodwinds and horns trading chorused, playing in unison, chasing and challenging one another in Back Bone, a song crowned with a drum solo by Mel Lewis which is sheer elegance and effortlessly reactive. You cannot help but feel that this is a double programme where the performances are terrific in their intensity and panache throughout.

The package is comes complete with the most exhaustive book documenting the manner in which the performance came to be; how the recording came to be and best of all, recollections from some of those who were there at the time, played in the orchestra, as well as some of the finest photographic documents of one of the finest orchestras to grace the planet from Chuck Stewart, Ray Avery, Jan Persson and Raymond Ross. This is a priceless set for the music and the booklet that is not only exquisite fare, but also for being one of the most important documents is the history of jazz. Musicians will learn from it. Fans will be thrilled by it and aficionados will cherish it as one of the finest items in their collection.

About the Thad Jones/Mel Lewis Orchestra

The Thad Jones/Mel Lewis Jazz Orchestra was a jazz big band formed by trumpeter Thad Jones and drummer Mel Lewis around 1965. The band performed for twelve years in its original incarnation, and included a 1972 tour of the Soviet Union during the height of the Cold War. The band won a 1978 Grammy Award for the album Live in Munich and in 2009 a Grammy Award for the album Monday Night Live at the Village Vanguard. The collaboration ended in 1978 with Jones suddenly moving to Copenhagen, Denmark, after which the band became the Mel Lewis Jazz Orchestra. Since the death of Lewis in 1990 it has been known as the Vanguard Jazz Orchestra. They have maintained a Monday-night residency at the Village Vanguard for five decades. Read more…