But the history of poetry in concert with Jazz and other styles is longer than that and very rich indeed. To name a few marvelous recordings: Charles Mingus (A Modern Jazz Symposium of Music and Poetry, Bethlehem, 1957) and of Langston Hughes with Charles Mingus (Weary Blues, MGM, 1958) to many more down the years, including iconic ones by the great Oscar Brown. Jr such as Sin and Soul…and then some (Columbia, 1961), recordings by Gil Scott-Heron (Winter in America, Strata-East, 1973), Jayne Cortez & The Firespitters ‎Cheerful & Optimistic (Bola Press, 1994), which together others by the legendary Amiri Baraka (and now also Amina Baraka) would fill a vast library of music and poetry… Paul and Jane Bowles and Brian Jones whose Brian Jones Presents the Pipes of Pan at Joujouka followed Paul and Jane Bowles’ Moroccan recordings, together with brilliant ones by William S. Burroughs with Brion Gysin and the Beat Poets, Ornette Coleman, Bill Laswell, and others… 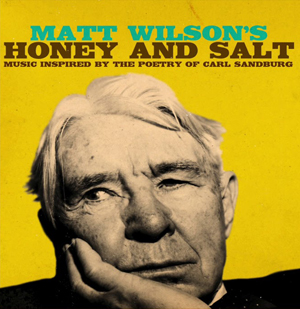 But the recording in question by Matt Wilson stands apart as one that seems to dwell at once in the pastoral imagery of Carl Sandburg as well as in the imagination of one of the most remarkable musicians and drummers of our time. It is an atmospheric recording, made more so by the light and airy cornet of Ron Miles. But Mr Wilson will have us listen to the work as an ‘audio book’, divided into three chapters and an epilogue. Each chapter, if you will, is made up of poems by Mr Sandburg, narrated by musicians, who bring a unique melodic and rhythmic beauty to the poetry. This, in itself, is a novel idea and enables the musicians top bring the dimension of tone colours and textures expertly using instrumental timbre – mostly by Mr Miles and Jeff Lederer, with his reeds (especially with his bass clarinet) and harmonium, but also with Martin Wind on contrabass and Dawn Thomson on guitar and with her voice, and, of course, Mr Wilson, whose percussion colourings on “Fog” and then on the fragment “Choose” as well.

Uniquely, of course, one is introduced anew to the work of Carl Sandburg, which might have been done in its time with American troubadours, (as is heard with Dawn Thomson’s guitar and achingly beautiful vocalisations and (again) Ron Miles’ cornet on “Offering and Rebuff”) or a bluegrass, or even a jug band. And then there is this Honey and Salt version of this poetry played seemingly in a frieze enshrined in some rocky grotto of old and of the days of Carl Sandburg. Here Miss Thomson and Ron Miles, and the voices of Christian McBride, Matt Wilson, John Scofield, Jeff Lederer, Jack Black, Bill Frisell, Rufus Reid, Joe Lovano and Carla Bley with the colours and textures of their singular voices have much to do with this extraordinary magical journey to the past. In both events we do not merely discover Carl Sandburg afresh, but we also uncover a new aspect of Matt Wilson’s music, one that is penetrates the inner ear just like a needle piercing the fabric of a quilt made of visions of Americana; the kind that Walt Whitman saw, and Carl Sandburg saw and Bill Frisell saw…as does Mr Wilson, who seems to weave music into words and vice versa as he imprints everything on the skin of his drums.