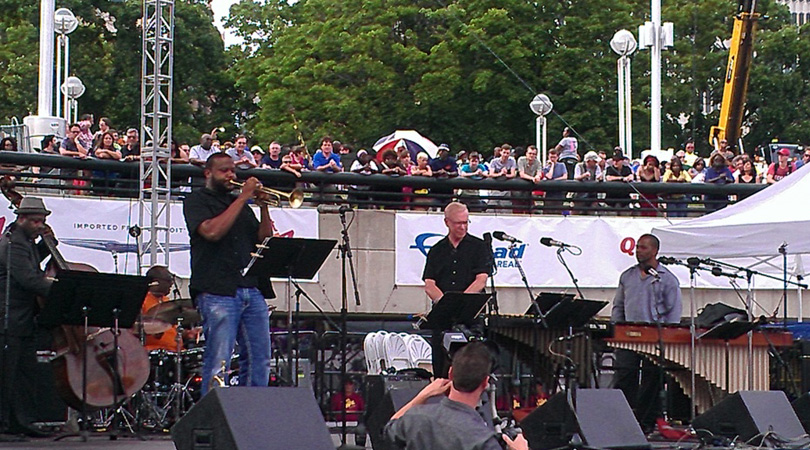 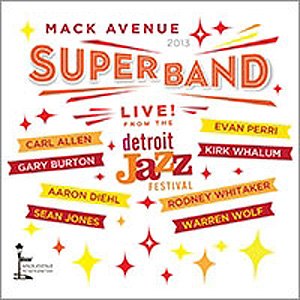 The age of super groups came and went largely as rock rose and fell in America. While the super group was never really a phenomenon in the realm of Jazz, often such ensembles were brought together for special occasions. The reason they were not successful is that—as with other musical idioms—egos might have got in the way. There is also the fact that in improvised music the looseness of the music and its non-linear direction makes musicians drift apart rather than bind them together. One of the more successful super groups in playing in the jazz idiom have been the Montreux big bands, especially the one that was conducted by Quincy Jones. But there are others—smaller Big bands—and one of these is the Mack Avenue SuperBand. This recording, Live from the Detroit Jazz Festival—2013 is an interesting example. Because of the lack of egotistical playing it is almost hard to think of this group as a super band, but it really is; not perhaps in the reputations of the musicians but certainly in the content of the recording. Much of this has to do with the efforts of Mack Avenue, a label that ironically seems to eschew the production of SuperBands. So this effort is curious and eminently attractive for the wall of sound that they produce without the perfunctory strings, brass and woodwinds of a so-called jazz orchestra.

Rodney Whitaker must be commended for holding the group together with a command performance from behind his forward-thinking bass playing. And then, of course there are the members of the band. Vibraphonists Gary Burton and Warren Wolf issue their musical missives with tremendous angular attacks when they play together and apart. The vibrant playing of trumpeter Sean Jones is redolent of a vaunted brass performance the likes of which might not be associated with young trumpeters such as him. The same might be said of saxophonist Kirk Whalum. Aaron Diehl is quite simply superb and turns in a performance that is mature beyond his young years. Guitarist Evan Perri is a true revelation. Carl Allen is on top of his game—a far cry from his days with Freddy Hubbard, when he seemed to be overawed by extra-musical situations especially when that group performed live. And then there is the group that is glued together by Mr. Whitaker’s working them from the edges of the music towards the middle as if he were building a musical edifice from the outside in, each time the musicians were playing one of their classic repertoire. This is most wonderfully observed in “Of Mars and Venus” and the gospel-inflective preaching of “I Want Jesus to Walk With Me.”

But there are also classic individual performances and songs that will forever stick in the mind. “Señor Mouse” is one of those charts written by Chick Corea and which delights just as much as it did when Gary Burton recorded it with Chick Corea in Zürich four decades ago. Here Warren Wolf arranges and plays marimba and Gary Burton plays vibraphone and between the two they turn Mr. Corea’s chart into a classic all over again. This is a group worthy of its name and certainly worth every chart that the listener can experience from a fine book indeed.

The Mack Avenue SuperBand Live at the Detroit Jazz Festival 2013 documents a concert at the Motor City’s capacious Hart Plaza by an ensemble of leaders culled from Mack Avenue Records’ extraordinary artist roster. It’s the second configuration of the group, which debuted at the 2012 Detroit Jazz Festival, mixing veteran stars with mid-career leaders and up-and-comers. The resulting album, Live From The Detroit Jazz Festival – 2012, received critical kudos for the fiery chemistry and soloistic derring-do contained therein. For the follow-up, Al Pryor, Mack Avenue’s Executive Vice President for A&R, assembled a slightly pared-down unit. Back for round two are vibraphonist Gary Burton, trumpeter Sean Jones, guitarist Evan Perri, and the rhythm section of pianist Aaron Diehl, bassist (and music director) Rodney Whitaker and drummer Carl Allen. Joining the mix are veteran soul/jazz saxophone giant Kirk Whalum and the sensational vibraphonist-marimbist, Warren Wolf. The results are no less scintillating—a program as cohesive and precise as a studio recording, but infused with energetic vibrations emanating from the several thousand hip, enthusiastic fans who attended the free concert. Read more…