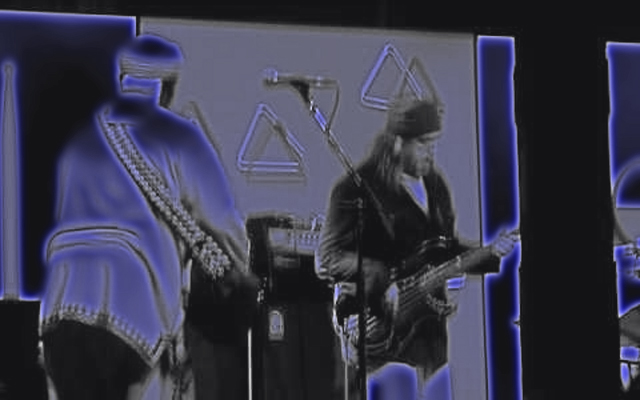 Falling hopelessly in love with Morocco is easy, especially if, as an eager initiate, your introduction to the ethos is Paul Bowles. Not long after, of course, you discover the Gnawa of Essaouira after which it is impossible to ‘leave’ the kind of place you grow to love. And so, by 1994, I pleaded guilty to being seduced body and soul by the first howling notes played by Pharoah Sanders on the tenor saxophone, followed shortly thereafter by the beguiling sonic assault on the guinbri from Maâlem Mahmoud Gania. The record in question is Bill Laswell’s production The Trance of Seven Colors. The two musicians, accompanied by the Maâlem’s party amass a texture of increasing expressive mesmerism and dark-hued eloquence which is exquisitely inebriating and utterly memorable. And therein lies a rather unfair comparison between that disc and Laswell’s current foray into the Gnawa world of Essaouira – this time with Maâlem Mokhtar Gania, the younger brother of Maâlem Mahmoud – which has produced Tagnawwit – Holy Black Gnawa Trance and an inspired group of musicians. 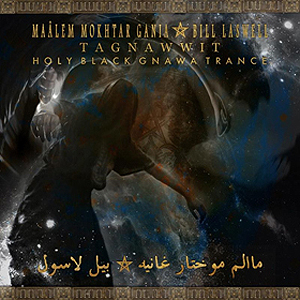 Direct comparison with the 1994 record is indeed unfair, because the two programmes are entirely different. The former captures an entire trance ritual with the blue-black of the lila as a backdrop to its collision with Laswell’s always surprising experimental and avant-garde, ambient, minimalist and improvisational traditions. This latter disc, Tagnawwit – Holy Black Trance, although not elementally different from The Trance of Seven Colors, presents a fusion of six tracks that usher in the spirits for the ritual, a ‘conjuring’ (if you will) that includes raising the spirits of ‘Sidi Fkih Shamharouch’, ‘Oulad Khalifa Maneen Shesh’, ‘Sheikh Moulay Ahmed’; praise the name of God in ‘Mabodallah Allah Dayyim’ and, once again, raise the Children of the Forest in ‘Zaini’ and in ‘Toumarmania’. Each presents a kind of holistic musical mind-body-spirit travelling in search of the miraculous. Each piece strikes a chord and the blows to body and soul are evocative and physical, with performances by Maâlem Mokhtar Gania, Bill Laswell, the Moroccan party and (especially) Graham Haynes, Aiyb Dieng and Adam Rudolph being particularly striking as they pull off compositions that are compelling studies in stasis and movement.

The production notes suggest that the performance combines recordings produced in Copenhagen with Maâlem Mokhtar Gania and his party by co-producer Torben Holleufer and production and recording and mixing in Orange Music, West Orange, NJ by Robert Musso and James Dellatacoma, and mastering by Michael Fossenkemper at his Turtle Tone Studios in NYC. However, Laswell – for it must surely be his miraculous combination of diffusing the digitization of music with miraculous, albeit, electronic touches that transform the stasis of electronica from subliminal droning into the sound of sashaying fabric swishing in the ghostly, mesmerising, dance-like moments of the musical rituals echoing from the hillsides of the Atlas Mountains along the Atlantic shoreline of Essaouira.