What a uplifting and thoughtful programme The Royal Bopsters Project is. I cannot think of a more memorable recital as heady as this by Amy London, Darmon Meader, Dylan Pramuk and Holli Ross and featuring The Royal Bopsters Mark Murphy, Sheila Jordan, Annie Ross, Jon Hendricks and Bob Dorough. I am tempted to say that this might be one of the finest four-part-harmony-plus… that has been put down on record. In glowing voices London, Meader, Pramuk and Ross rip through a richly imagined ecstatic and deeply felt repertoire made even more spectacular with The Royal Bopsters themselves on eight of the twelve songs. More riveting music there has not been since the Manhattan Transfer recorded Vocalese in 1985. 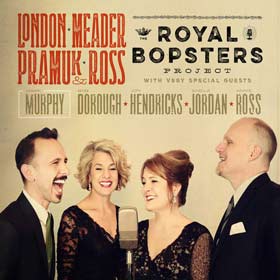 The extraordinary four-part harmonies are suavely beguiling and they are leavened by the vocalese of the group and guests, the ineffable Jon Hendricks, Mark Murphy and Bob Dorough and Annie Ross (who is remarkably sharp), and the great Sheila Jordan. Amy London and Holli Ross field supple, vernal lyric jazz coloratura that soars without strain or hardness into the stratosphere. Discerningly partnered by Darmon Meader and Dylan Pramuk the girls can spin pure legato growing naturally from the curve of the line and the flux of the harmony. The florid melismas and glorious tessitura of Sheila Jordan’s “Peace” in an idiom that suggests high-end chromaticism – and the tricky, vaulting leaps of the song are negotiated with effortless grace as only Ms. Jordan can.

I suppose if you give her one song to be the lead voice on, there could not be a better pick than Horace Silver’s quintessential “Peace” for Ms. Jordan. And what about bassist Cameron Brown? The inspired pairing of the two on the chart will give you goosebumps. Mr. Brown’s solo is one of the finest by the musicians on this date. More so is the fact that Cameron Brown feels the emotion of the song just as much as Sheila Jordan does, which makes their pairing spectacular in its own right. But the dénouement of the song, when Ms. Jordan dedicates the song: “For Horace Silver” is quite indescribable. She almost steals the thunder of the other singers on the record. Annie Ross too is as hip as Ms. Jordan as she too shares the role of the other guests in spreading the jazz gospel.

While Jon Hendricks and Bob Dorough are superb, the crowning glory for the male singers is Mark Murphy’s. He delivers exquisitely timed and pointed vocalese especially on “Red Clay” and “Chasin’ the Bird”. His Jack Kerouac soars with exuberant radiance in the form of romanticised rococo. Mr. Murphy has a panache that is unrivalled among male vocalists. He is the epitomé of cool and yet he sings in red-hot jazz metre and in a jazz idiom that serves to reinforce his reputation as a vocalist with unforgettable panache. And let’s not forget, the exquisite cameo by guitarist Roni Ben-Hur on “Let’s Fly” and the sensitive, ubiquitous role that Steve Kroon plays throughout.

Of course the memorable music belongs just as much to London, Meader, Pramuk and Ross as much as it does to The Royal Bopsters. The male voices soar with tenor and baritone lyricism like poetry in the wind and the plush soprano of Ms. London, and the alto of Ms. Ross is a joyous and judicious mix of not-too-harsh bravado and playful sensuality that makes this performance of the quartet just the ticket.

Track List: Music in the Air (wildwood); On the Red Clay (Red Clay); Peace; Basheer, the Snake and the Mirror; Señor Blues; Invitation; Bird Chasin’ (Chasin’ the Bird); Music is Forever; Bebop Lives (Boplicity); Just Step Right Up; Nothing Like You Has Ever Been Seen Before; Let’s Fly

About the Royal Bopsters Project

The Royal Bopsters Project is a singular recording with a one-two vocal jazz punch. It simultaneously introduces a powerful new vocal jazz quartet –London, Meader, Pramuk & Ross – while it serves as a stellar vehicle to honor five of the most influential jazz vocalese legends of all time: Mark Murphy, Bob Dorough, Jon Hendricks, Sheila Jordan, and Annie Ross. This epic and historic release is co-produced by Motema artist Amy London with vocalist/arranger Darmon Meader, the founder, tenor and key arranger of the famed New York Voices. Read more…