The art of Wayne Horovitz is and has always been infinitely interesting in that it displays a markedly individual approach to music, one where luminous textures and extreme tempo fluctuations are conspicuous by their frequency. Now key in this 2015 record fabulously entitled Some Places are Forever Afternoon (11 places for Richard Hugo) and you have every reason to enjoy this music all over again notwithstanding the fact that it has taken the poems of Richard Hugo and relocated them to the landscape of music. You might easily expected that to be the other way round, but Mr. Hugo wrote in breathtaking cadences – free verse, but often referencing iambic rhythms – and so the fact that they have now become Wayne Horovitz music is an event almost as important as their original publication itself. 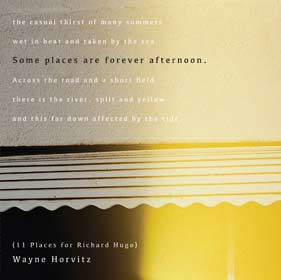 The art of Richard Hugo might not have been known were it not for his occupying a creative writing chair at Yale. Mr. Hugo was reared in rural America – Washington State to be precise – and as a result his work came to be regarded as regionalist. But then came Yale. However, now that we have this Wayne Horovitz record, the poems are likely to resuscitate themselves in the heart of Americana rather than in the heartland of America and Mr. Horovitz will have played a large hand in this. Words such as ‘haunting’ and phrases such as ‘profoundly beautiful’ don’t even begin to describe the music here. The relationship between piano and an interesting array of instruments is truly edifying. The music remains an attractively clean-cut, formidably concentrated offering.

Rhythmically pert movements are also fueled by a lyrical impulse and act as an effective foil to the unnervingly bleak landscapes of Mr. Hugo’s poetry. In fact if anything the solitary trumpet of the ineffable Ron Miles pitted against the growling double bass of Keith Lowe and the cello of Peggy Lee at the outset put me in the mind of Sibelius’s Finlandia. We have Wayne Horovitz to thank for this remarkable impression as he pushes the tautly-argued creations of instrumentation to irrepressible drive and razor-sharp resourcefulness anticipating the poems of Richard Hugo. Mr. Horovitz also plays a key role in orchestrating every item in this repertoire. And what a splendid arranger he is too.

There is something tantalising about the group that plays this music, which is not merely entertaining, but ethereal and magical, and almost mystical, as Richard Hugo’s poems were and Wayne Horovitz gives them the added element of fantasy in an already fabulous landscape by virtue of his approach to the poems. This entails a magical distilling of the poems to extract the purest form of metaphor. Yet an unselfconscious frisson of symphonic timbre and period clarity really does kick these poems and the music into some highly distinctive realms. Of course, with the stellar musicians to enable the fantasy to prevail still it is the direct and ringing pianism of Wayne Horovitz that defines this unusual collaboration between Mr. Horovitz and Richard Hugo.

Track List: Money or a story; those who remain are the worst; you drink until you are mayor; Nothing dies as slowly as a scene; all weather is yours no matter how vulgar? The beautiful wives; for Jim and Lois Welch; to some other home; The car that brought you here still runs; last place there; You must have stayed hours; Some places are forever afternoon

Wayne Horvitz is a composer, pianist and electronic musician who has performed extensively throughout Europe, Asia, Australia, and North America. He is the leader of the Gravitas Quartet, Sweeter Than the Day, Zony Mash, The Four plus One Ensemble and co-founder of the New York Composers Orchestra. He has performed and collaborated with Bill Frisell, Butch Morris, John Zorn, George Lewis, Robin Holcomb, Fred Frith, Julian Priester, Michael Shrieve and Carla Bley, among others. Read more…