The alto saxophone appears to be a way of life for Kenny Shanker. It lives and breathes as if an extension of him; and the notes flow out of Mr Shanker as if he was made almost completely of music himself. It’s the reason why Mr Shanker is so much in demand by some of the – well – most demanding band leaders in music; from The New World Symphony, the Tommy Dorsey Orchestra, the Nelson Riddle Orchestra, Lage Lund, Richard Bona and Taylor Eigsti [to name but a few]. The fact that he can be part of a big band means that he is fluent reader. Playing in smaller ensembles – especially in those with Mr Bona, Mr Eigsti, who are among the more daring inventors and improvisers will tell you that Mr Shanker can create music those who jump without a net too. 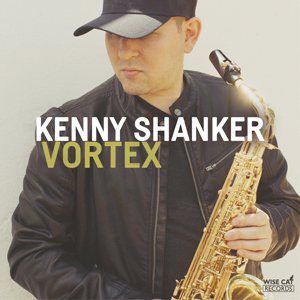 On his 2022 recording Vortex the repertoire is representative of all of Mr Shanker’s gifts; his highly musical intellect is clear from the original compositions and if you are looking to see how far he will go then look no further than “Vortex” a deep, spiraling song with mighty melodic and harmonic inventions. And then there is “Midnight snack” which is comprised of much more of the same, with a palpitating rhythmic pulse added to the song structure. Moreover, Mr Shanker employs a magnificent aesthetic to this piece in terms of the colours and tone=-textures – overlaid by using the soprano saxophone. It is a song on which – with masterful performances – drummer Brian Fishler and bassist Yoshi Waki shine bright.

Mr Shanker not only sees himself as part of the music continuum, but also pays homage to Jazz and other standards. On “Lulu’s back in town” he doffs his proverbial hat in reverence to the great Thelonious Monk and even invokes Mr Monk’s daunting harmonic and rhythmic conceptions while performing this interpretation. His set closes with a bittersweet interpretation of “Autumn Leaves”, wherein the “crying” melodic lines of the song are accentuated by his own dolorous “weeping” on the alto horn. On “The Duke” he pays handsome tribute to the incomparable Dave Brubeck, whose composition is beautifully crafted to capture the spare virtuosity of Duke Ellington.

Naturally Mr Shanker also basks in the glory of his musical retinue, which also includes the inimitable Mike Eckroth a pianist of unparalleled character. Mr Eckroth is one of the finest pedagogues in music, whose breadth of knowledge is vast and so much in demand today that he is sought after by Afro-Cuban musicians for his deep knowledge of traditional Afro-Cuban forms of music – something he has brought to the fore with his writing [and arrangements] for the magnificent ensemble Orquesta Akokan. On this disc, however, it is Mr Eckroth dazzles with his “Jazz” chops with touching and dramatic intensity. Mr Eckroth, together with the fluid harmonics of guitarist Diasuke Abe, as well as with the performances of the rest of the musicians, – including trumpeter Bill Mobley, Mr Shanker has crafted an album full of music of incredible beauty.