Benjamin Koppel is an excellent alto saxophonist; an artist of the first order. On Mulberry Street Symphony he is joined by the contrabassist Scott Colley, a musician’s musician possessed of a gravitas that is quite rare in popular music [every other bassist seems to aspire to “walk” daintily and “swing”, forgetting that the role of the bass is to not only play time, but add depth-defying continuo and hold up the bottom end of the harmonic line. Also present here are the prodigious champion of the drumset, Brian Blade, a colourist so extraordinary that when he plays he sounds like a whole crashing percussion section. 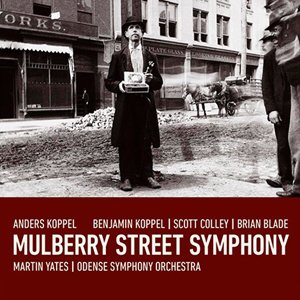 under the baton of Martin Yates. The spirited, occasionally restless performances thrillingly capture the adrenalin rush of a “live” concert with all its ebbs and flows; its tensions and relaxations; diminuendos and crescendos.

It is, however, a studio recording yet it preserves all of the incisiveness, urgency and lightness of touch that the orchestra musicians are required to bring to it in order to set the backdrop for this mighty sonic exhibit. The frontline musicians – Messer’s Koppel, Colley and Blade – play in perfect counterpoint to the orchestra, wresting the score from the orchestra as well as yielding control of it to Mr Yates and his musicians. Together this makes for a performance of breathtaking balance and poise.

Anders Koppel’s composition is a brooding, poignant account of a series of images of 19th century New York City, by the Danish photographer Jacob Riis. It was a time of continuous European immigration to the USA with the majority of immigrant population drawn to New York City, for the prospects of a beckoning economic situation far better [or so they thought] than what the families were leaving behind. The photographs themselves – featured in the album booklet are unadorned and describe the unforgiving plight of what the 19th century immigrant faced in the New World.

The music matches the stark meditative mood of the photographs. It is often ink-dark, but every now and then the sunlight of life seems to break. This is captured by the trio of musicians who favour the flowing tempi [especially on the spritely “Bandit’s Roost” [on Disc two], on which there’s a great sense of spontaneity and elasticity than anywhere else in this music.

The symphony starts out serenely, though. There’s little if any sense of vivace at all. Rather one becomes aware of a growing ebullience. It is signaled subtly at the beginning, as liquid streams of quavers gather in a gentle cascade and reaches fruition as the music is developed [and unfolds] towards the middle section, and the dénouement of each movement which surges exuberantly. In between, though, there’s an ebb and flow, a multiplicity of swirling currents that are somehow contained as an uninterrupted body.

Listen to somewhere in the centre of “Tommy the Shoeshine Bly” [on Disc one] – or better still on “Bandit’s Roost” – where the instrumentalist of the trio trade searching syncopated melody and breathless accompaniment [by the orchestra. Messer’s Koppel and Blade imbue this intertwining dance with tender intimacy. Meanwhile, led by the ascending notes from Mr Colley’s contrabass, the orchestra describes the narrative movement of both photographs perfectly, and the resulting feeling of anticipation – especially when the brass and woodwinds mounts a charge – is exquisite.

In numerous passages throughout the programme, in fact, the players find ways to hold even the most expansive melodies or phrases taut [but not rigidly so] and thereby create enormous tension. The opening of “The New House” [on Disc two] is a magnificent example of this], especially leading in to the alto saxophonist’s solo. There’s a section towards the middle adagio where – after some intricate figuration – the colours and textures suddenly become drastically darkened and viscous, almost as if someone is reluctant to enter a forbidding place.

And then – where Mr Koppel unleashes his ravishingly dolcissimo playing as the orchestra musicians reduce their sound to a seemingly confessional whisper – everyone else follows suit turning the whole piece into an intensely, memorably expressive finish. The finale of the symphony is a rhythmically elegant and robust work evocative of Puerto Rican bomba, plena and other vibrant dance features.

The composer dives into it all with swirling Hammond organ figures featuring stabbing harmonic flights that underpin the wailing solo of the alto saxophonist. Both musicians take obvious pleasure in details without losing sight of the larger picture – the bleak prospect of 19th century New York City – that has suddenly come alive with excitement is the Barrio of the South Bronx. Naturally, as anyone who followed the collision of Jazz and Afro-Caribbean Jazz the music changes substantially.

Thus the finale of the symphony is explosive, rhythms bristling, dynamic contrasts starkly illuminated and with an unrelenting thrust. “Encore: Puerto Rican Rumble” is an exhilarating encore to a superbly satisfying double-disc. This one will sit proudly alongside anything that has come – or is to come – in terms of short- or long-form music during 2022.