Forty-three years had passed since a sixteen (or was it fifteen)-year-old Vera Brandes, then working for Manfred Eicher and ECM, booked Keith Jarrett into the Opera house in Köln resulting in what is now one of the greatest concerts in modern memory by an improvising musician. In the intervening years Mr Jarrett performed and recorded a staggering array of music from classical to Jazz. But like few other musicians in any era, the pianist has also performed long sets of purely improvised music; conceived in what he famously calls the “Cavelight”, deep within the cerebral topography of his vast musical brain. This concert that he performed on July 2006 at Gran Teatro La Fenice, in Venice has now been released as, simply, La Fenice and it shows that the fire that was lit decades ago continues to burn; a steady and eternal blue light that radiates from head to the very nerve endings of Mr Jarrett’s fingertips. 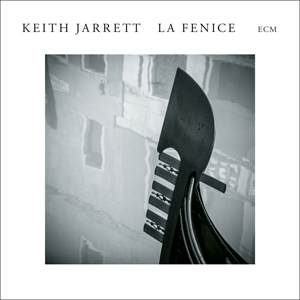 Among those playing today Mr Jarrett is alone in the world of the piano – indeed all of music – and bestrides the twin ramparts of written and improvised music like a proverbial Colossus. With flawless technique and expression he has made benchmark recordings that have spanned the classics from Bach’s Goldberg Variations and the Well-Tempered Clavier to Shostakovich’s 24 Preludes & Fugues, op. 87 and Arvo Pärt’s Tabula Rasa with the Stuttgart State Orchestra conducted by Dennis Russell Davies. With his iconic trio of bassist Gary Peacock and drummer Jack DeJohnette he has all-but redefined the nature of trio music played by a Jazz ensemble. An equally-bright light must, however, be shone on his work as a soloist performing virtually completely improvised music. “Virtually”, in this case, because Disc Two of this double CD set contains three Jazz standards and an original.

Of those artists in improvised music Mr Jarrett is virtually a law unto himself with no one today (except Egberto Gismonti) for company. The music on La Fenice proves this once again – just like that Köln Concert and A Multitude of Angels (music from the four concerts in October 1996). Every piece on La Fenice is played as if impelled like a river of music. Each melodic variation follows the other, quite inexorably, his sumptuous pianism caught brilliantly in this live recording. There is an unhurried quality to his approach, a magical character to his phrase-making that is unlike what you will hear from any other musician. And unlike other musicians of equal experience Mr Jarrett continues to inhabit the fire and brimstone of his youth, melding this with the well-honed values of experience as he moves seamlessly between worlds, through swing and bop hinting at Jazz (“Part V” on Disc One, for instance) at other times, with music unfolding like a Schubert Lieder, crossing over into the classical realm; but always ever so subtly and ephemerally.

The variety and stylishness of this enterprising La Fenice recital programme is matchless. Mr Jarrett brings effortless urbanity and lyricism to all the items contained within, which are as seductive as they are persuasive, and an object lesson in the very essence of style. The one entitled simply “Part VIII” is played with especially buoyant, aristocratic grace and psychological ambiguity. Mr Jarrett is (rightly) almost insolently effortless here, giving us a history lesson in pianism, bringing debonair virtuosity and swagger when it comes to Jazz in the sassy swing of a tribute to the era of boogie-woogie. But the treats don’t end there as Mr Jarrett goes on to play two ravishing standards and an original composition bringing the full weight of his virtuoso genius to bear on these interpretations and in the conception of his own “Blossom”.

There are those who might suggest that this concert was recorded twelve years ago and thus attempt to question where Mr Jarrett is at now, but all of that is really academic when one considers just how timeless his music sounds – no matter what decade or millennium it has been created. His expressionist colours shine through the keys of the piano like blushing petals on a flower in the throes of bloom or dark red wine invading the thirsty palette having been matured for what might seem like an eternity. Also arising like a sudden thrill down the spine is a feeling that somehow Mr Jarrett manages to discern the mathematical precision of music as Bach once did and state this in emotional and passionate terms as if privy to music’s passionate secrets like Beethoven and Schubert and Chopin. How else could one explain the abject beauty of “My Wild Irish Rose” (on Disc Two)? Also, just as unique as his inherent musical genius is Mr Jarrett’s voice with which he has created musical literature that has, justifiably, raised him to a rarefied, mythic realm where but a few artists continue to dwell.