Home Music Kamasi Washington: Heaven and Earth
It will be a travesty if the release of this mighty three – no less – disc set from Kamasi Washington entitled Heaven and Earth passes, so to speak, as a ship in the night because it has been released around the same time as John Coltrane’s Both Directions at Once – The Lost Album. Truth be told, if we are aficionados then we will “know our John Coltrane” well. And even if the album is being advertised (yes, indeed advertised) on network and cable television, it should be set aside for a moment because – with absolutely no disrespect to John Coltrane, one of the Patron Saints of Jazz, no less, there is just as much buried treasure on Heaven and Earth as there is on Mr Coltrane’s Lost Album and anyone who says otherwise is a “Music Denier” and ought to be at least pilloried if not outright burned at the stake. 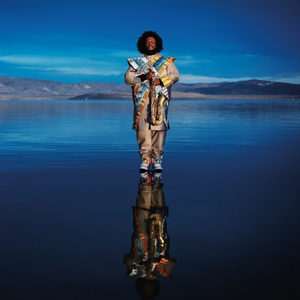 When he released his aptly entitled recording (another 3-Disc set), The Epic, enlightened reviewers likened it to the arrival of Mr Coltrane’s true successor. Presumably because Mr Washington worshipped at the altar of originality and displayed a deep and questing spiritual sound that made his music sound like tongues of fire. His playing though was less strident than the keening wail that was heard when Mr Coltrane propelled himself on his epic solo expeditions, especially those of his later years towards the end of this classic quartet years and into his music with Alice Coltrane, Rashied Ali and others – First Meditations and Ascension and after. By comparison – not that there is really any to be heard – a Kamasi Washington solo is a relative rarity. And when he does, his sound is more atmospheric and he seems to glide and soar as if on the wings of a dove. Or put another way the brimstone and fire of his spirit ancestor is replaced, as it were, with the whisper of a blue flame in the relative silence of a candle.

In other words anyone expecting to hear Mr Coltrane reborn is in for a disappointment. Mr Washington is really like no one you will have heard. His mighty spiritual battles spring eternal from the same source that Mr Coltrane, Pharoah Sanders and Albert Ayler discovered, but when he embarks on his evangelical mission, his sermons are staged not on an echoing pulpit but in the dust of our everyday street-corner. And on Heaven and Earth he has brought the whole church out onto the street. Not only his expanded ensemble built upon the rock of the core of his Apostles – Patrice Quinn, Cameron Graves, Miles Mosley, Thundercat, Tony Austin, Ronald Bruner and others – but an army of crusaders as well in the form of a twenty-six person orchestra, augmented by an thirteen-member choir. The result is music that is built on what we first heard on The Epic, only on a vastly expanded soundscape; music which is literally elevated from earth to an infinitely rarefied realm.

Mr Washington lets music speak to him in a very special way. This he turns into a glorious pageant that most certainly belongs to the continuum. His songs as if they have been ground out like the fine mixture of a medieval apothecary; music full of glinting lights, magic and mysterious depths, frustrations, expectations, hopes and doubts, like the shattered shadows of a seemingly endless dark quasi-Mendelssohnian scherzo, glimpsed by eternal moonlight in a concrete forest. It is so dense in texture that you can almost reach out and touch it. And it has a kind of kinetic energy that feels like the pulsating of the collective heartbeat of a human Diaspora – in this case, certainly all of Heaven and Earth – throbbing in one’s temple as song after song and solo after solo, and searing orchestral and choral crescendo bubbles and courses through the blood. It is the music of a deep thinker, and here is where Mr Washington has his meeting of the mind with John Coltrane. Like his illustrious predecessor Mr Washington is also roaming his own consciousness for the proverbial Light that will point him in the direction of his Holy Grail.

Thus his journey, he tells us in the majesty of song, is an inward journey from earth that he (presumably) hopes will lead him to heaven. It is out of this epic quest that the music of Heaven and Earth has been born. Now we are left to make our own discovery, follow his map to set forth of journeys of our own, if we feel so inspired. First though we must unearth the buried treasure of this music. Navigating the music we find first and foremost as we decode the clue in his short note on the inside of the CD gatefold that there is a resolution to the journey and it comes in the form of three – not two – discs; the third disc contains the music relating to “The Choice” – five relatively shorter songs that constitute the endgame.

So how to get the most out of this magnificent music? Listening to in one continuous sitting gets you the best Wagnerian effect; the fullest impact of Mr Washington’s haloed playing; the best effect of pulsating heart-music by Mr Mosley, Thundercat, Ronald Bruner, and Mr Graves, who is in top form throughout along with trombonist Ryan Porter And trumpeters Dontae Winslow, Chris Gray, alto saxophonist Rickey Washington orchestra and soaring choral, and, of course, the ethereal beauty of Patrice Quinn’s vocalastics. Through it all, Mr Washington brings effortless Washingtonian urbanity and lyricism to music such as “The Invincible Youth”, “The Psalmist” and all the rest of the epic score that he has composed himself. His take on Freddy Hubbard’s “Hub tones” and Carole King and Gerry Coffin’s “Will You Love Me Tomorrow” is grand and spacious, the former ensconced in an abundance of throbbing rhythm and the latter in elegant balladry. This is an album for the ages, just as the Lost Album by Mr Coltrane. The beauty and power of Mr Washington’s music and its epic grandeur must never be drowned out by the noise of Mr. Coltrane’s, no matter how priceless the latter is.