Home Music Justin Mullens: The Cornucopiad
Justin Mullens is not yet among the most familiar names in the Jazz French horn world. But that’s because word of his brilliant recording, The Cornucopiad hasn’t yet spread around the world yet. It will be quite another matter when that happens. Mullens has set himself a pretty formidable task, which is to personify the French horn as something larger than the music that’s played on it; even life itself. Partly relying on Greek mythology and classic Jazz standards, Mullens’ horn comes to life, both figuratively and literally, as a supernatural being. That he even attempts such a challenge is remarkable, but that he succeeds with distinction – both in his striking compositions as well as in performance – is a testament to his secure technique and shining tone (these pieces are merciless to anyone with a timid sound or dodgy technique). 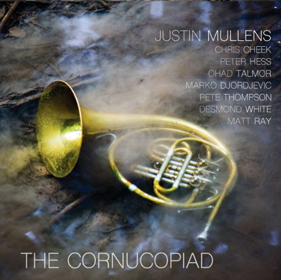 Technical prowess certainly stands Justin Mullens in good stead – especially in the faster movements (of his pieces) which bowl along at speeds that are fast enough to be exciting and carefree without ever sounding rushed (e.g. in the breathtaking finale of ‘The Goatfish’). But it is in the slower movements that Mullens excels, regularly finding atmospheric beauties and depths in his ‘Cornucopiad Suite’, which many horn players have either missed or are simply unable to achieve. The very opening of the ‘suite’ – ‘Amalthea’ lets you know that you are in for something special with the most exquisite messa di voce from Mullens, and a natural control of line and phrasing that is reproduced throughout the rest of the suite in some of the most beguiling music ever written for the French horn.

Even more impressive are the eloquent dialogues Justin Mullens can conjure in this music, for instance right from the seductively posited curlicues of ‘The Goatfish’ or in the warm and intimately involved exchanges of ‘The River Horn’. Add to that convincing ornamentation, the compelling colourings of his horn and an individual view of music that surprises in the sombre complaints of the mythological/instrumental characters through the first two movements as well as a light-footed finale in ‘The River Horn’. Now, to all of this add the fact that Justin Mullens has enlisted the support of seven of the finest musicians in New York (see personnel details below), including three other horns, a guitar, bass, piano and drums and this octet recording is true joy.

However, there is more. Knitting the suite into a set of other music including Freddie Hubbard’s ‘Hub-tones’ and John Coltrane’s great ballad, ‘Naima’ and you have a case of a horn of plenty. And the fact that Justin Mullens succeeds majestically in aligning his instrument with the cornucopia of classical mythology. Larger than life? There can be no doubt about that, more so because this is truly sumptuous music played with clarity of vision by a musician eminently qualified to take his place with the ‘big boys’ of the French horn; Vincent Chancey and John Clark. And that’s no fantasy. Let’s hope there’s plenty more where this came from!