Home Music Joris Teepe: In The Spirit Of Rashied Ali

Rashied Ali rose to eminence in 1965 when he first augmented John Coltrane’s classic quartet joining Elvin Jones in the drum department. He would have been on the date to record Ascension in March of that year, but only joined the group in November to make Meditations. Mr Ali continued to carry a torch for Mr Coltrane, playing with Alice Coltrane after Mr Coltrane passed away a couple of years later. Although he was known principally for his work in Jazz, Mr Ali was an astonishingly versatile percussionist. His ability to swing, play inside and outside the beat – in free time – made him one of the most sought-after percussionists in several contemporary musical realms. The bassist Joris Teepe came under Mr Ali’s spell sometime after he relocated to New York from his home in The Netherlands and he has been spreading the “gospel” of Rashied Ali in free time ever since. Taking things a step further Mr Teepe has made his feelings for Mr Ali felt with an unique homage to the drummer. Entitled In The Spirit of Rashied Ali this tribute – a CD together with a 64-page book edited by John Weijers, an entrepreneur who has the founded forward-looking Mindset Creative Intelligence Agency and two record labels based in The Netherlands and the USA. 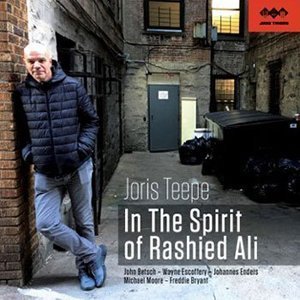 You will not find too many artistic endeavours like this one. It is a small-sized book with “big” intentions and it delivers on that aspect of its promise. There are seven featured written works – including essays and interviews with key personnel in the world surrounding both Mr Teepe and Rashied Ali. Each is utterly absorbing and together they certainly seem to unearth aspects of the legendary drummer and his music that might easily have escaped those interested in his life and music had it not been for the contributing writers/interviewees who have contributed/appear in the text of this book. Mr Teepe’s essay itself is a wealth of information and goes far beyond the scope of his time with Rashied Ali to revealing insights about the music scene in the two decades (1992-onwards) since the bassist arrived in New York City. Patricia Ali – the drummer’s wife – contributes vivid and heartfelt memories about the rhythm of life and living in the Rashied Ali household pouring these into an interview with the drummer George Schuller. The late Sonny Fortune talks about what a “long jam session” with Mr Ali was like. There is a profile of Me Ali, an essay by Mr Teepe and two others by Greg Murphy and Jumaane Smith; but perhaps the short written memorial to Rashied Ali by his drummer-brother Muhammed Ali is the most poignant.

And then there is the music…This is legacy of Rashied Ali that lives on in the music of those who came into his orbit. Mr Teepe leads a spectacular group of musicians including the drummer John Betsch who also excelled in the ensembles of Steve Lacy; besides which there is the inimitable guitarist Freddie Bryant and three saxophonists: tenor saxophonists Wayne Escoffery and Johannes Enders, as well as alto saxophonist Michael Moore. The repertoire ranges from compositions from Don Cherry (“Multi Kulti”), Ornette Coleman (“Turnaround”) and a surreal-sounding work by Frank Lowe (“Sidewalks in Motion”) as well as two songs by Thelonious Monk (“Think of One” and “”Ba-Lue Bolivar Ba-Lues-Are” – which is played here sans drums and is called “Bolivar Blues”. The one you want to hear and cherish is “Rashied Ali Suite”, an extended composition by Rashied Ali that is breathtaking in scope and spirituality. Mr Teepe has contributed two compositions to this repertoire – “Holland-America” and “Alphabet”. The most remarkable aspect of these performances is that they are beautifully crafted arrangements of mesmeric variety and sensuousness in every lovingly crafted phrase. Mr Teepe’s performance is front and centre – though not necessarily deliberately so – and it is memorable throughout especially in the magnificently sculpted soli and the especially in the long inventions during the song “Rashied Ali Suite”.

Every musician is superbly attuned to Mr Teepe’s artistry and vision. That (vision) in turn must raise the spirit of Rashied Ali and it is remarkable how much this is achieved through the visceral excitement and energy of the group especially John Betsch whose broad shoulders carry the greatest load, and who “brings the music home” in every aspect of spirit and truth.