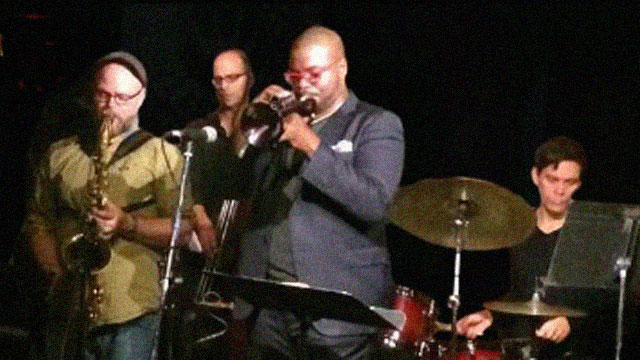 Johnny Griffith and his quintet have not turned the idea of a brass, woodwinds and rhythm section ensemble on its ear, but the originality of the repertoire in its reference to classical mythology and the nature of its dramatic mono and dialogues, eagerly circumvents the mainstream. On this 2015 disc Dance With The Lady reminiscent of Henry James’ celebrated novel, the musicians pour irresistible energy and dazzling skills into pieces with roots in drama and storytelling that unfurls in idioms of blues, jazz, the classics and beyond. 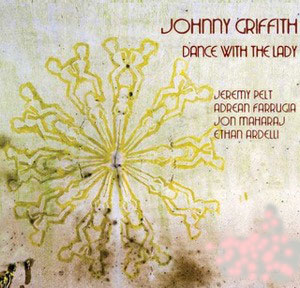 The disc is rich in literary allusion and the title piece is an explosion of lyricism and haunting ideas that seem to embrace all of the influences especially English song. Mr. Griffith has tapped into his quintet’s ability to bring a sense of improvisatory surprise to whatever they touch. The composer’s invigorating artistry can also be gleaned in his arrangements of his own pieces and in his ability to recognise the various voices that will indulge in the splendour of the music and go wild with the utilisation of their improvisatory skills.

Blues influences rub shoulders with contemporary techniques in “Dance With The Lady”. “The Mile Walk” explores a spectrum of moods and the quintet indulges in activity that is both introspective and wailing. I also like the feel of Jon Maharaj’s turn on “Bass Interlude”, which is transfixing, conjures up a vivid dramatic monologue of a bass violin in pizzicato mode, by building rhythmic momentum on increasingly propulsive phrases. Earlier, “The Zissou Predicament” is witty and quite disarming; an exuberant ride in which the ensemble paints a narrative picture with all sorts of colours and in all sorts of textures as well. The cosiness and tender lines of “Cinders” is disarming as it is playfully subversive, the saxophonist and leader dueling with the ubiquitous trumpeter Jeremy Pelt.

The quintet’s leader, composer and saxophonist, Johnny Griffith has his moments in the sun in each of his compositions performing his soli with remarkable dexterity and flair. His colleagues rejoin him for the disc’s nostalgic and puckish finale “That Night… (Under the Bench) So Long Ago”, a song which is arrangement in a delightful manner and brings out the quintet’s coolest qualities in this singular group’s artistic arsenal. Moreover the songs provide the individual members of this quintet with a magnificent opportunity to stretch out with this glittering showcase. The group responds in kind, with bountiful excitement and lyrical ardour.

Track List: The Zissou Predicament; Princess Aura Goes to Phrygia; Syrah; The Kuleshascope; Bass Interlude; The Mile Walk; Dance With The Lady; Cinders; That Night… (Under The Bench) So Long Ago