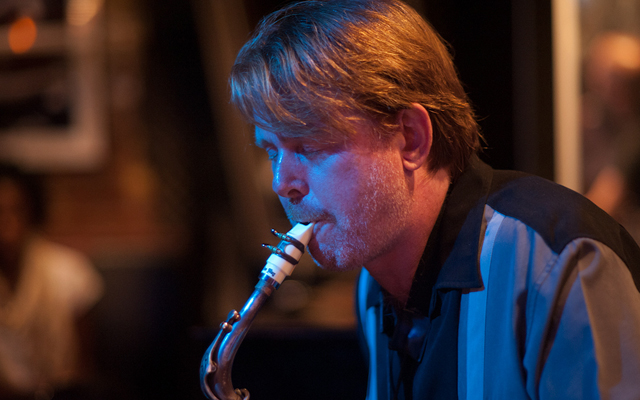 The music of John O’Gallagher, with its restless forward thrust, its colourful orchestration, its dizzying juxtapositions of dark and light, serious and silly, is immediately recognisable as John O’Gallagher. And you hear this through the seven pieces of this stage performance with his trio, Live in Brooklyn. But there is no, predictable simple-minded O’Gallagher ‘brand’. Every one of the pieced that has been put down on record is a surprise, but surprise within intelligible parameters. “I’d like everyone to sit up and take notice,” John O’Gallagher seems to be saying before each song. And then he proceeds to knock you off your feet so you can’t help but notice.

But John O’Gallagher is not obtuse. His music may come from different angles. His music has the restless iterative, surface of classic Anthony Braxton-like modernism, but the style is distinctly different. For instance, although angular, his musical lexicon suggests a journey through remembered or imaginary landscapes in which, for instance, the “Extralogical Railman” is leading him – and you – on a wry and mischievous passage to rebellion against abstraction and suddenly found that there was a reason to prevent that very insurgence from taking place. 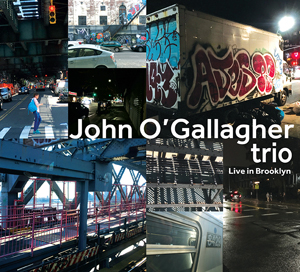 The contemplation that follows is jumpy, ironic, a source of mirth and confusion, derision and fascination with the miraculous epiphanies that follow, specifically through “Credulous” – wide-eyed music with sustaining power, elegance and ease.

Also rewarding on the orchestrating front is “Prime” with which The John O’Gallagher Trio begin their performance, and more so, “Blood Ties”. The latter is both structurally and emotionally rich. In it bassist Johannes Weidenmüller and Mark Ferber, the drummer articulate O’Gallagher’s schematic with impressive timbral variety. The rest of the music is rich in song. “Nothing To It” and the trio’s mesmerising closing track, “The Honeycomb” , is also music where the elegant conception of the music can exist on multiple levels albeit written for a trio. Its relative complexity is excellently worked through by the three musicians as each reveals phrases and lines that give way to more theatrically developed virtuosity, resulting in a truly compelling work.

This live recording combines accuracy and clarity with a warm ambience and almost tangible texture. And just as well, because it has captured The John O’Gallagher Trio in a performance keenly alert to the twists and turns of the music’s dynamic contrasts, while providing welcome and requisite quotas of passion.