Home Music John McLean-Clark Sommers Band: Parts Unknown
A sense of wry resignation pervades the music of this disc by the John Mclean-Clark Sommers Band from the tongue-firmly-in-cheek “Blondie Roundabout” to the acquiescent moodiness of “Last Call”. Other titles – including the very title of the record – suggest mystery and wide-eyed wonder, and even feelings of submission to the proverbial ‘inevitable’. In contrast to all of this the music is played with a great deal of visceral excitement and urgency, although never making light of the subject of the narrative; or the wonderful metaphoric writing by John McLean, Clark Sommers and Joe Locke. The sole composition by the legendary pianist Mal Waldron suggests his (the pianist’s) state of mind facing life without Billie Holiday, expressed in the gorgeous elegy, “All Alone”.

Each of the four musicians plays his instrument with taut virtuosity. Joe Locke powers his way through the music with his sinuous attack, always tempered with a certain depth of emotion that inevitably provides a glimpse into his emotional side – his ‘yang’, if you will. John McLean is a thorough virtuoso who gives the impression each time he plays that the guitar was made solely to announce his mastery of the instrument and he seems to bend the strings as well as the very air around them to his will, with some of the most outstanding sonic excursions. 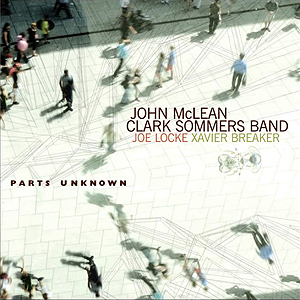 Clark Sommers, for his part, makes the contrabass sing from its very bowels, even as he approaches each solo (or ensemble) performance with Zen-like understanding. And Xavier Breaker plays with extraordinary wisdom far greater than his young years, tapping into Time personified.

Although the performances are uniformly good, by far the finest example of both unison and solo playing takes place on “Time Window”. The almost dreamy, floating quality of “Safe and Sound (At the Edge of the Milky Way)” is not far behind. Each of these musicians has a (musical) life outside of this partnership and yet it is hard to believe that considering the almost transcendental empathy with which they understand each other and how it is they always seem to finish each other’s statements without any form of imposition or change in the syllogism. It all adds up to an almost indelible partnership celebrated on Parts Unknown in a meaningful way. The masterful musicianship from each member and the handling of this material is one for the history books.