With playing that sounds so free it’s hard to imagine that this is through-composed music. But pianist Joe LoCascio, by his own admission, decided to challenge himself to do what he not only appears to have done successfully on the repertoire of Book of Days; he has also – in the process – made his eighteenth album something of a miracle. 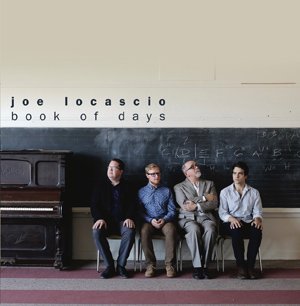 Perhaps this is what is – and always has been – expected of Mr LoCascio. After all he has “paid his dues” playing behind a roster of mighty musicians that reads like a who’s-who of modern popular music: Chet Baker, Randy Brecker, Dave Liebman, Frank Rehak, Freddie Hubbard, Mel Lewis, Bob Brookmeyer, George Coleman, Pharoah Sanders, Marvin Stamm, Carl Fontana, Hank Crawford, Ernie Watts, Arnett Cobb, Conrad Herwig and Jon Faddis are – believe it or not –just some of them. On Book of Days the continuing story of Mr LoCascio’s musical life picks up, eight whole years after he left things off, this time with the saxophonist Woody Witt. And he wastes no time in assuring listeners that it was more than worth the wait.

Mr LoCascio and Mr Witt cover this fertile musical ground like thoroughbreds, with exemplary virtuosity. And the two musicians are wonderfully served by bassist Richard Mikel and drummer Daniel Dufour. The music is elegantly fashioned from notes that fly off the page, accompanied every now and then with breathtaking harmonic and rhythmic flights that make for timely and breathtaking surprises that enhance the worthy melodies that the pianist has penned. There are no big slow movements and astonishingly quick ones where lightness predominates. But everything is in balance; perfectly timed and intelligently placed so as to seem a natural organic fit for the music into which stylish evocations have been written played with sublime gestures. “Nomads”, “Brother” and [probably the pinnacle of this album] “Point taken” are superb examples.

This is, in sum, an alert and memorable recital. The recorded balance is exactly right and wrings nuanced emotion from the instrumental flights – especially when Mr Witt’s soprano saxophone launches into its elemental wail. The playing [everywhere] acknowledges a debt to music with its meticulously considered structure. But above all, this is a propulsive, urgent, dizzyingly virtuoso performance, one that leads a climax of a profound sort in the thrilling intensity of the album’s finale which is aptly named “Vigil”, with the exquisite playng con arco by the bassist and, not least, because it portends many more wonderful things to come from Mr LoCascio and the rest of these fine musicians.