What, you might ask late at night, would the soundtrack of an uplifting film finds lonely, frightened characters traversing a contemporary “Yellow Brick Road” on the ink-dark night in question? Well, Radio Announcer introduces us to an option you would not want to miss on his cool, funky and laid-back “Radio intro” to Morning Star. Mr Robertson has choice words of introduction for us: “My man… Thomas Heflin,” he says, in a fittingly languid drawl, also dropping a couple of superstar-names: “Gregory Tardy… and Mavis “Swan” Poole…”

Remember the name of Mr Heflin, though because if you have been spinning the radio dial too much lately, you are surely not going to wonder why you didn’t hear of him before. Mr Heflin’s take on the lineage of the cool, spacey trumpet is considerably less than conventional here, 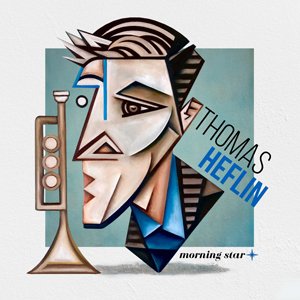 seeing him summoning woodwind-like tones from the instrument that float benignly over the sound of a keyboards-driven ensemble with Peter Stoltzman at that helm who, in its turn, adds a rich and not entirely predictable harmonic foundation to the music.

Of course, it is the stars – billed as such because they are just that – that come in the form of the inimitable muscularity of Mr Tardy and his horns, and the ultimate soulful and silken voice of Miss Poole. The surprises, when they come, are effective but discreet – such as the radiant keyboard redolent of high-flying ululations from Mr Stoltzman’s Fender Rhodes on “Evensong”, the delicate curlicue of a bass line from Steve Haines’s gamelan-like riff, played as pizzicato harmonics shortly thereafter, sounding like a Gaelic lament.

Elsewhere – and often enough – this nocturnal soundtrack appears as a vocal-filled ensemble passage with Mr Heflin leading the ensemble like a proverbially hypnotic pied-piper. His mesmerising musical sojourns seem to develop from a single phrase before launching themselves on seemingly impossible flights of fancy so organic to this music. Meanwhile, José Luis Torres “Papiosco” provides a rippling Afro-Cuban groove that gently builds under Mr Heflin’s jazzy grooves on the eloquently angularity of “Morning star” and “Haiku”, as the rest of the ensemble injects a rousing Cuban quality, launching into a broodingly percussive, tumbling groove before the loosely funky close.

This is the perfect moment and it gives way to DJ Robertson’s slick segue into the eloquent bottom half of this superb album, not the least because of the nuanced watercolors of the balladic, “Anna Breschine”. The considerable degree of balance and integration of melody, harmony and rhythm, of composition and improvisation, of exploration, individuality and expressive force is impressively maintained throughout this exquisite music.