Here, in one fell swoop, is evidence of Jeremy Gill’s mastery of the form. Capriccio is one of the most remarkable opuses in chamber music this year. The cumulative impact of its individual pieces is quite breathtaking, some of which clearly occupy the bluest part of the flame of the art. The Parker Quartet certainly do them justice by setting the bar very high, with their astoundingly fresh, supple readings of the pieces (listen to #3). I would not be surprised if they scoop up a clutch of awards and extremely disappointed if they did not. The four virtuosos play with visceral energy, even high-octane playing when the pieces call for allegro (playing), while adding an extra degree of rusticity, which isn’t inappropriate. 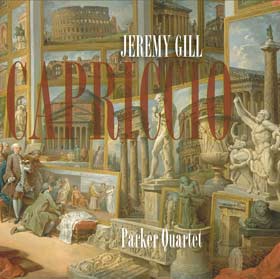 The Parker tend to play up the extremes in the music still more, notably in the febrile #2 of Part 1 and #17 in Part 2, with their exquisite gradations of dynamic and timbre. The Capriccio pieces play into their hands being equally colourful, and give them a run for their money. The very opening to the Capriccio is beautifully managed – sustained, with clarity of counterpoint pointing up to the individuality of the four players as well as their collective finesse – before giving way to the lolloping allegro that, as so often with this composer, attempts – and manages – a carefree demeanour. The ambiguity of mood is superbly conveyed. It’s very much in keeping with their vision of the music, with several movements packing a punch out of all proportion to its duration.

The Parker are not afraid of using portamentos either, applied with particular elegance to the entwining melody every so often, which, when applied, is encased in warmly voluptuous sound. But beauty is never at the cost of musical direction and a sense of the pacing of the Capriccio as a whole. It is in Part 2 that I find the Parker particularly compelling. The opening four movements again have the warmth that they brought to Part 1, while they superbly manage the rhythmic instability of the movements here, capturing their darting febrile quality with precision and grace. Throughout they relish the composer’s shifts in mood, playing this up with whimsy and fervour. And their ending of the Capriccio is a superbly adrenalin-pumped affair. These are performances that make you fall in love with this music.

The recording is immediate and present. It is of audiophile quality (but there’s no audible intake of breath), with no distracting sounds. The accompanying notes combine scholarship with readability and are particularly enlightening on the subject of the composer. Cover art too is most compelling. Only one question: why put the word “Capriccio” in large font right across the picture?

About the Parker Quartet

Formed in 2002, the Grammy Award-winning Parker Quartet has rapidly distinguished itself as one of the preeminent ensembles of its generation. The New York Times has hailed the quartet as “something extraordinary,” the Washington Post has described them as having “exceptional virtuosity [and] imaginative interpretation,” and the Boston Globe acclaims their “pinpoint precision and spectacular sense of urgency.” The quartet began touring on the international circuit after winning the Concert Artists Guild Competition as well as the Grand Prix and Mozart Prize at the Bordeaux International String Quartet Competition in France. Read more…