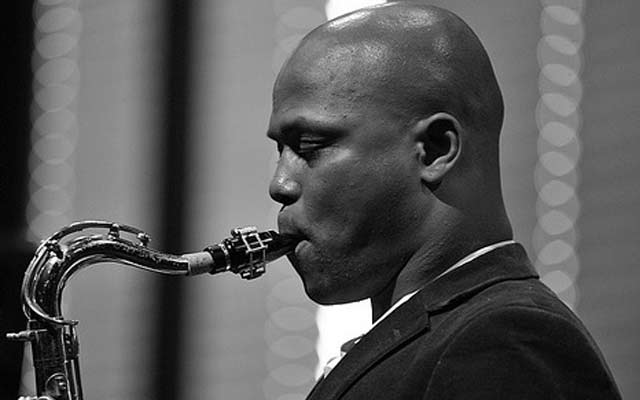 Why no one should acknowledge that JD Allen is the next big thing on tenor saxophone is quite beyond me. That may be about to change with the release of Graffiti. It’s easy to appreciate why this will be. Magnificent technique, of course; BIG tone as well with a certain gravitas that is privy to the likes of great tenor players such as Pharoah Sanders and Wayne Shorter; the trickiest passages seem like child’s play to him. But what impresses most is Mr. Allen’s musicianship – he is able to make the listener aware of the emotional import of each phrase, apparently spontaneously, as though he’s only just considered playing it that way. Take the way he plays the whimsically named “Jawn Henry” of the profoundly beautiful “G-d speed B. Morris” and you will know what I mean. Both have genius that recurs several times, and on each occasion JD Allen is able to find a new tone colour, a different touch of rubato. 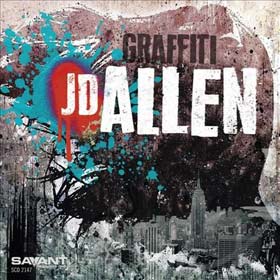 In Mr. Allen’s hands and in every breath he takes, then exhales the music is like a living thing; one senses that each performance will have its own individual character. In all of the songs on this classy album, he values musical character over sheer brilliance, showing a strong feeling for the drama for the solo, phrasing for the theme in the most lively way and always capturing the full character of the folk-blues inspired episodes while avoiding any grotesque exaggeration. Similarly in some songs – notably “Little Mack” he embraces the music’s playfulness, its moments of lyricism and the times when attack is needed. Also in much of the music here, when bassist Gregg August and drummer Rudy Royston take over the main theme rhythmically, of course, JD Allen is happy to retire from the foreground and play a decorative role.

Throughout Graffiti Mr. Allen shows an impressive command of the larger musical paragraphs, as in long melody that makes up the songs here. Also in many of the songs his expressive arc of the lyrical is just as enthralling, even though here he often has to collaborate with the other members of the trio, who share the melody with brilliantly transitive rhythm. This leaves JD Allen to be his own harmonic doppelgänger as well. In passages on “G-d speed, B. Morris” too Mr. Allen introduced a number of broad glissandos that the work’s dedicatee Butch Morris might have also liked to use to heighten the expressive effect in his own performances. He does so discreetly and tastefully, and, I think, makes a strong case for the need to connect the notes in this way, if the touching quality of the melody is to be fully brought out. Again, Mr. August and Mr. Royston and the balance, while sounding entirely natural in its perspective, allows all the important solo lines to make their mark.

There is another important thing that comes through, not necessarily in Graffiti alone, that at this stage in his career doesn’t offer the kind of stylistic playing that challenges traditional ways of playing music. And while some might say this is like a mouldy fig, in actual fact there is a continuity of line; a historical significance that cannot be overplayed. For in generally adhering to Shorter-Rollins-Sanders-Coltrane-Hawkins-Young-Webster line he makes several of the familiar little embellishments, octave transpositions and variations that generations of tenor saxophonists have liked to add. There is also the fact that JD Allen plays melody with immaculate and powerful expression. At times he can also be swift, light and remarkably effective but never at the expense of gravity of playing.

For these and many other reasons, Mr. Allen is without par. His warmly communicative manner is something to be treasured over interpretive correctness. All in all, this is a most impressive release; something to die for.

Allen has spent most of his career in New York City, where he has played with Lester Bowie, George Cables, Betty Carter, Ron Carter, Jack DeJohnette, the Frank Foster Big Band, Winard Harper, Butch Morris, David Murray, Wallace Roney, Cindy Blackman, Orrin Evans, Gerald Cleaver, Me’shell Ndegeocello, Dave Douglas and Nigel Kennedy among others. Allen’s debut album, In Search Of J.D. Allen, was awarded the Best New Artist award in Italy in 1999. His next release, Pharoah’s Children, was named one of Jazziz Magazine’s Critics Pics Top 10 Albums of the Year. The Victory! album, released in 2011, received a four star rating in Downbeat and was ranked as the third best jazz album of 2011 by NPR. He has won DownBeat’s 2011 Rising Star Award.