Home Music Jane Monheit: The Songbook Sessions – Ella Fitzgerald
There are, happily three people in the musical ‘marriage’ between the extraordinary vocalist Jane Monheit and the inspirational Ella Fitzgerald, and that is the musician and producer of awe and wonder: Nicholas Payton. Talk about great expectations that are never disappointed. As you may hear on this album, from the very start, Ella Fitzgerald’s ‘bouquet’ of song-performances is lightly held, thanks in no small part to Payton’s influence in lightening or darkening melodies and focusing Monheit’s mezzo, so that we are enraptured by outbreaths of intensity. 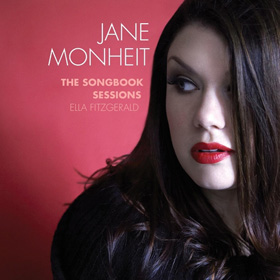 And the sense of awe and wonder which hovers over Jane Monheit’s entire performance is particularly close-focused in the songs. Payton’s playing whether on his trumpet or on organ and piano is the ever-shifting heartbeat behind the wonderfully supple expressive contours of Monheit’s voice, eloquently tracing those of Fitzgerald’s expressions of these melodies. Payton seldom allows Monheit to be side-tracked by the intensity of her moment-by-moment response; rather they recreate together the elusive movement of the music’s whispered breath and being.

From the very start of the programme, and I mean every song in The Songbook Sessions Nicholas Payton ensures clarity of timbre and evenness of pace through Monheit’s beautifully poised, sighing breath. He powerfully supports the piercing anguish of loss in her high register, and the dark longing and despair expressed in her chest voice. This performance revealingly searches out the cycle’s paradoxes of life and loss, dream and reality, time and eternity. And the emotional narrative of Nicholas Payton’s trumpet postludes continues long after Monheit’s final breath-taking vocal disembodiment. I would also be remiss if I did not doff my hat to Monheit’s regular band mates who are sensitive and empathetic throughout.

Track List: All Too Soon; Somebody Loves Me; Chelsea Mood; Something’s Gotta Give; I Was Doing All Right/Know You Now; Ev’ry Time We Say Goodbye; Where Or When; All Of You; I Used To Be Colorblind; I’ve Got You Under My Skin; This Time The Dream’s On Me.