I would hazard a guess that either Jane Antonia Cornish is a master of a stringed instrument and plays one in secret and that she is a young genius of a composer for the writing Continuum are so beautifully idiomatic and nowhere is this more evident than on the four pieces of this disc. The seemingly spare score of the Tree Nocturnes creates a sense of breathtaking room in which the music of sound and silence glide like familiar partners on a waxen floor. Four cellos gasp and moan as if reflecting the profound beauty of the night. They take their time as the composer has bid them to. Glacial harmonies waft through the speakers as the cellos sound as one magnificent choir of strings hinting at something like a crepuscular wave of air that feels warm and tactile as Ms Cornish has created a perfect illumination for darkness. 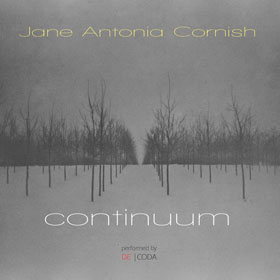 Never have violins – two of them to boot – and four cellos been so beautifully glued together with the pizzicato sonority of a bass guitar. The very nature of this composition and its performance suggests an interminable forward movement. Jane Antonia Cornish is no less adept at scoring this piece for two violins and a quartet of cellos. The same calm comes to the fore in the two movements and the ingenuity of the composer is once again brought to the fore as this music pulsates with dramatic tone colours and textures that come from soaring violins and deeply emotional playing by the four cellists. As might be expected the bass anchors the septet of strings and magically embarks on a beauteous journey of its own. Playing in the resonant acoustics of the Frederick P. Rose Hall at the Lincoln Center the group are able to create an interplay of stasis and dynamism culminating in a heady finale.

Portrait is a very different account of the timbre of the cello as the piece stresses elegance and a more understated expression, contrasting with various colours and an uninhibited approach to the tonal colours of the instrument. The ebb and swell of lines are exquisite as notes seemingly dapple the emotions that unfold from the beautiful instrument. Tides returns the composer to the familiar interplay of two violins, a cello quartet and the bass guitar. The rhythm of the music provided by the bass suggests buffeting winds that envelop a sea bringing it into harness by unleashing the harmonic chemistry of soaring registers which the violins bring to the music and the gravitas of the cellos. This is a vivid piece and the players’ evident enjoyment in this and other music on this exquisite disc is quite irresistible.

Jane Antonia Cornish is a British Academy Award winning composer who grew up in England and lives in New York City. Cornish has written music for both the concert hall and films. Continuum is her second chamber music album, released July 31 2015 by Innova Recordings. Performed by Decoda — the first ever Affiliate Ensemble of Carnegie Hall — these four world premiere recordings of chamber works explore terrain as disparate as the cyclic nature of the ocean’s tides, our relationship to space and memory, and deep connections to place. Continuum was named WQXR Q2 Music’s Album of the Week. Doyle Armbrust of Q2 Music wrote: “Continuum is a font of wistfulness and melancholic beauty…the success of Cornish’s creations lies in the organic, almost improvisatory-sounding air of these fluctuating harmonies and iridescent arpeggiations”. Classical-Modern Music Review wrote that Continuum creates “…memorably poignant sound structures…with a haunting spatiality, and a primal yet complex sense of sound”. Read more…