Of all of the modern exponents of the violin Christian Howes seems to know no limits to his explorations. This dazzling disc entitled American Spirit is a recital discerningly assembled and held aloft by two great pillars, the ubiquitous America with Leonard Bernstein whisking the American 20th century from under its nose and then almost at the end of the album, Shenandoah which features the glorious vocals of Polly Gibbons. Along the way, in a deftly balanced presentation of strikingly contrasted essays, Howes offers beautifully reflective and buoyant readings of sui generis ‘concert’ works. Once Upon A Time in America with its high and lonesome opening whose eloquent music trips along in a manner violinists seem universally reluctant to pursue, is simply a pearl And Just a Closer Walk is sweetly devotional in nature skilfully preparing the way for the highly distilled and contemplative variations on American Spirit. 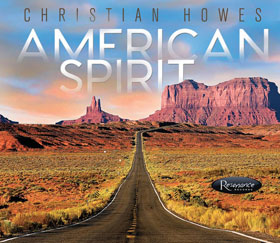 The seasoned reflexive qualities of Christian Howes, heard to such memorable effect on this repertoire are reawakened in the stunningly voiced combination of sounds from his magnificent instrument, played in all its glory. Great instrument aside, this is largely down to the judicious alchemy of Howes’ perception of how musical architecture and local tone colour can collide to mesmerising effect. Fats Waller’s T’Aint Nobody’s Bizness is a case in point as are Amazing and Angela. Inexorable momentum here is born of fervent authority, a virtuosity of combined effects without gratuitous excess. But it is the gripping drama and involvement in the classic larger-scale works that remind one of Kennedy in his most durable violin-playing legacy on various recent discs especially the Blue Note Sessions. Kennedy’s captivating direction and intensity, complete with an almost hypnotic abandon, is a touch more measured in Howes’ but no less effectively communicated.

This repertoire especially the hearty gallop of American Spirit is truly grander than any quartet could muster. Much of this has to do with the virtuosity of the violinist, but we must not discount in any way shape or form the exceptional gifts of bassist Ben Williams and drummer Gregory Hutchinson, with – alternately – pianists Josh Nelson and Hamilton Hardin. Ben Williams, especially, plays in granite-like blocks of intensely chiselled harmonic progressions studiously laid down as if for posterity. This helps the underlying immediacy and restlessness in Howes’ rhetoric which leads to something quite exquisite. As I believe, only Kennedy might better this performance and that too on a good day. For now, however, the grandeur, flair and emotional risk are in the hands of Christian Howes. And he surely does not disappoint.

Since 2011, performer, educator and composer, Christian Howes was voted #1 in the Downbeat Critics Poll (“Rising Stars/Violin”), named among the top three jazz violinists in the JazzTimes critics poll, and nominated for Violinist of the Year by the Jazz Journalist Association. He received the Residency Partner Award through Chamber Music America for outreach programs in schools, earned a USArtists grant through the Mid Atlantic Arts Foundation, and was invited by the U.S. State department for two tours to visit Ukraine and Montenegro. The Minneapolis Tribune called Christian “arguably the most intriguing young violinist in jazz.” Read more…