Home Music Jacqueline Tabor: The Lady in the Gown

If you are surprised by this impressive recording by Jacqueline Tabor you would not be alone. Miss Tabor has been away from performance, focused on raising a family for a considerable length of time. Then she returned to the scene with a series of accomplished albums and this path returned her to music once again. But with The Lady in the Gown she appears to have raised the bar on her performances somewhat higher than before, to write a new musical chapter in her life once again.

Miss Tabor is radiant throughout the repertoire on this album. The songs were chosen wisely; picked from the ever-popular American Songbook. These include songs from films and stage shows, and several are Jazz standards that have also now entered that vaunted songbook. 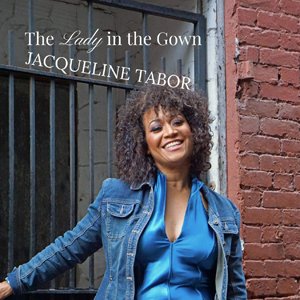 Miss Tabor delivers standout performances on each and every one of them. She has also surrounded herself with musicians who have brought considerable imagination to the songs on this recording.

The recording begins with a somewhat rare vocal rendition of “On Green Dolphin Street” by Bronislau Kaper and with lyrics by Ned Washington. “Somewhat rare” because of the more than two hundred recordings of this song since it was first broadcast in the film of the same name in 1948, a majority have been instrumental. These have included several by Miles Davis, who gave it the status of a jazz standard, and even versions by the legendary tenor saxophonist Albert Ayler and one by the virtuoso Cuban pianist Gonzalo Rubalcaba. Miss Tabor’s version is magnificent and features a gorgeous, idiosyncratic bass and drum orchestration played by Greg Feingold and Max Holmberg. Guitarist then enters the song with an appropriately minimalist harmonic contribution.

As an improvising vocalist Miss Tabor is superb throughout the recording. Her approach to each song is fresh and her diction is superb. Her phrasing is quite novel and she allows the songs to live and breathe through her, singing each with grit, charm and sensuality. Her balladry is strong but I believe that she is especially good when tasked with a bluesy song. Her handling of “Crazy He Calls Me” is quite extraordinary and she carries the heft of the Duke Ellington classic, “Mood Indigo” quite majestically.

She also seems to have a special affinity for the bass and her duet with Mr Feingold on “I Can’t Give You Anything But Love” is unforgettable, while on her breathtaking version of “Caravan” she seems to suggest that the same is also the case with Mr Holmberg, her drummer. Perhaps she takes “Autumn Leaves” a shade too up-tempo, losing somewhat, the brooding nature of Fall, but her version of “Misty” is magnificent. For everything that Miss Tabor does vocally and for everything that the musicians who accompany her do to embellish her singing, this is a highly desirable album.