The former YouTube sensation, Jacob Collier is all grown up now and seems headed for a stratospheric career in music. His first albumIn My Room , so named not only the Brian Wilson’s iconic song, but paying glorious homage to Wilson’s classic Beach Boys arrangements with his (Collier’s) own harmonic inventions that is played in ‘slow-drag’ tempo. And that’s only the beginning of the record – the second song actually. As a matter of fact Jacob Collier had exploded on the Internet and it was not long before he caught the eye of the heavyweights such as Quincy Jones and Snarky Puppy, and more recently on an album by Dominick Farinacci, Short Stories (Mack Avenue, 2016), on which he transforms Horace Silver’s “Señor Blues” into something quite transcendent and wholly new. 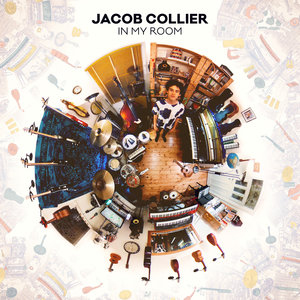 On In My Room we are treated to the full range of the genius of Jacob Collier. He is a solo singer, who conjures up a whole choral group and an instrumentalist who, like Stevie Wonder, can incarnate himself as a whole ensemble. In fact, if there is one musician that you could compare his supernatural music to it would be to Stevie Wonder. And yet there is no one quite like Jacob Collier. He is the very epitomé of the term “singular musician”. No one in recent times can fine tune to every style the way Collier does. Every aspect of his musicianship seems like natural territory to him. His vocal intonation, inventive harmonics that he teams up with instrumentation is first-rate. Add to that he has the uncanny ability to orchestrate his own work in a manner not unlike the Sir George Martin. Some outstanding examples on this record are “In My Room” and “Down the Line” and “Hajanga”. All feature remarkably imaginative scoring that swirls around the impressive intonation of his voice. And he is not afraid to use electronics the way Martin did in the studio at the behest of John Lennon and Paul McCartney, of course.

Jacob Collier can – and does – play all the instruments on this album and he does so with impressive virtuosity. Clearly his principal instrument is the piano, together with its electronic extensions that he uses to create vocal harmonics – both synthesized as well as natural – in real time. But Collier is also an astute and deep-veined performer on drums, strings, melodica and so on, and he does not hesitate to use everything at his disposal – including, by his own admission – pots and pans and cutlery from his mother’s kitchen. Merely utilizing such instrumentation would be vacuous in anyone else’s hands, but Jacob Collier uses each to create a symphonic sound and an enlarged tonal palette that capitalizes on the unique timbres of each instrument and ‘instrumental surface’. By extension Collier is rare kind of aural painter who wields a mystical sonic brush. “Hajanga” is a classic.

And just when you thought Jacob Collier could not get more creative he ups the ante on “Flintstones” with vocalastics like you may not really have heard before. With the use of vocal percussion he adds rhythmic punctuation to the vocal lines that feature straight and angular harmonics, neat phrasing and on-and-off-the-beat precision the hectically paced classic. Best of all if you strip away the ornamentation, both vocal and instrumental, there is a pure voice there, with an extraordinarily dynamic range as is evidenced on “In the Real Early Morning”. Heard alongside stark instrumentation such as in this chart, one senses a magical poetry and lyricism that is showcased with fresh lustre and clarion ring. The best news of all is the fact that Jacob Collier, though very advanced musically already, is only 21 years old and still in the process of defining himself. But what an auspicious beginning…

Track List: Woke Up Today; In My Room; Hideaway; You and I; Down the Line; Now and Then I Think About You; Saviour; Hajanga; Flintstones; In the Real Early Morning; Don’t You Know.

Personnel: All songs performed, arranged, recorded and produced entirely by Jacob Collier in his room.