There are two kinds of artistry that Henry Godfrey has in spades: orchestral writing of a chart that brings out the dramatic nature of his works and anchoring his large ensemble with his expressive drumming. Moreover, his album Attitude & Gratitude seems to express his thanks for being surrounded by instrumentalists – brass and woodwinds players, [a] pianist, guitarist and contrabassist who are not only  excellent “reader”, but who also have interiorised his writing and then lift the notes off the page with their interpretations of his charts. 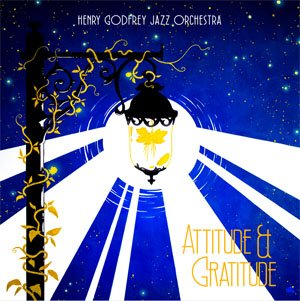 Mr Godfrey gives almost everyone a chance to stretch out and solo – and he takes an extraordinary one on Forgetting What Will Never Be. It would also appear that –taking a leaf out of Duke Ellington – he writes each chart to feature a particular soloist seeming “to call each out by name” so  to speak.  In addition, Mr Godfrey’s brand of hyper-Romanticism holds nothing back. The charts from For McCoy to We’ll Get There serve up heaps of counterpont, accelerated repeated phrases, wild runs, and melodic and harmonic tricks. One does not mean to suggest [by that observation] that Mr Godfrey is too clever by half; rather to point out that he is adept as making simple things interesting – even riveting.

Every foray into improvising on the changes – or, more frequently modal improvisations – is a leaping cadenza with some wonderful “wrong note” landing points and fiery scales that pit the soloist and the orchestra like two proverbial gladiators sparing to make the best “fight” out of each work of art. However the orchestra provide enough moments of calm before each virtuoso storm.

There are so many fine moments in each of the soloists’ individual forays with harmonic variation building on the one it picked up from, building on the melodies as if involved in creating a solid musical edifice. But one of these stands out and that is the profound, rumbling solo on Forgetting What Will Never Be by contrabassist Anna Abondolo. Mr Godfrey also follows with a monumental solo on this song too, but it is Miss Abondolo who makes the heart stop with the technical brilliance of her pizzicato and expressive architecture of her solo.

This is certainly one for the books, an orchestral recording to remember and although each musician makes a significant contribution to make this happen for listeners. Yet it is most certainly Henry Godfrey who gets top billing – and top marks – for pulling off another magical musical event.