The Labor Records label-owner Heiner Stadler also produced/produces for Tomato Records, Arcadia and Concord Records. He is also one of the 20th and 21st centuries’ most significant contemporary composers and is also a terrific musician and pianist. He Sadly, but not so surprisingly, these facts have been largely ignored. Moreover, he has not received much credit for his complete oeuvre, which includes such iconic records as Tribute to Bird and Monk. That 1974 record includes the most archetypal rewriting of music by Charlie Parker and Thelonious Monk and is a momentous addition to the library of modern music. What is also not well known outside academic and professional circles is the three records he made under his own name – Brains on Fire, Jazz Alchemy and Retrospection, the latter being the subject of this review by virtue of its 2016 re-release. 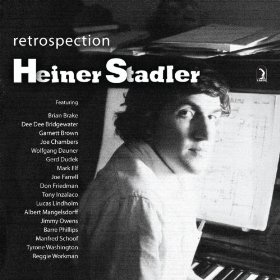 How good it is to have this seminal recording back in this pristine incarnation from Labor Records. Musicians to be heard on it – many of them stars in the field of modern music – perform five of Stadler’s compositions with exceptional finesse and urgency. The emblematic repertoire is rich and varied; models of scholarship as well as visceral excitement, in particular the haunting, monumental vocal track, ‘Love in the Middle of the Air’ which features an absolutely inspired Dee Dee Bridgewater, who has never performed with such raw emotion before, or since. Everything on the recording seizes the ear, including such instrumental gems played with fresh and noble discernment by some of the most legendary figures in Jazz. ‘The Fugue #2’ for instance includes bassist Barre Phillips, pianist Don Friedman, trumpeter Jimmy Owens, saxophonist Joe Farrell, trombonist Garnett Brown and drummer Joe Chambers forming a powerhouse ensemble if ever there was one.

‘Clusterity’ could hardly be more captivating, especially in the intrepid and brilliant performances by the Big Band of the North German Radio Station, as well guests Albert Mangelsdorff, one of the most important innovators on the trombone, together with pianist Wolfgang Dauner, saxophonist Gerd Dudek, cornetist and trumpeter Manfred Schoof, bassist Lucas Lindholm and drummer Tony Inzalaco. It’s nearly thirty minute score is one in which wonderfully ominous sounds in the lower register come to surreal life like a large transparent beast. ‘Pointed’ includes a rare appearance by Stadler on piano as he joins Jimmy Owens, saxophonist Tyrone Washington Garnett Brown, together with bassist Reggie Workman and drummer Brian Brake. The musicians here combine in a memorable experience that is primarily focused on unleashing truth in music.

Two versions of ‘Moving Toward You’ put a spotlight on a very young Mark Elf, a distinctive voice on the guitar who combines with Brian Brake (on take 2) to negotiate torrents of notes without losing clarity of texture, a feat over which he also triumphs on take 4 as he keeps the listener enveloped in his solo performance.

All through these performances is strikingly evocative music by Heiner Stadler immersed with vivid revelations in which the elegance and introspection of the blues is given new meaning by the composer. In his utmost commitment to the expressive needs of the music Stadler has created highly experimental and deeply sensitive compositions that also make for transformative additions to the peripatetic library of Jazz.