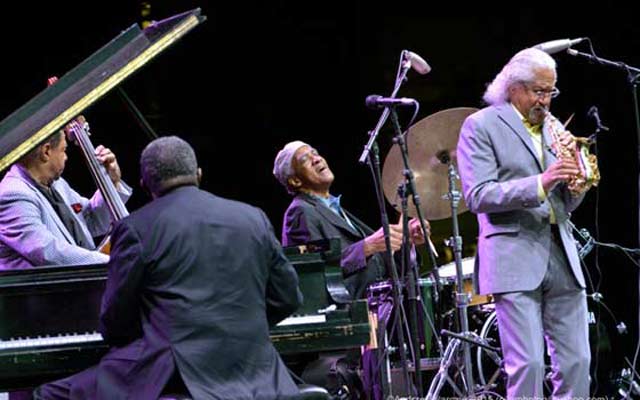 This is no clash of titans. Quite the contrary, this power quartet has turned out to be one of the more meaningful meetings of the minds resulting in a performance that has made music of the highest order. Once again the producers at Smoke Sessions Records have produced a winner. This is a vibrant, tender-hearted, boisterously youthful account of some of the most recognisably music in the jazz idiom – from the pens of John Coltrane, Jackie McLean, McCoy Tyner and Billy Strayhorn. The alternation of serenity and dizzying, up-tempo mood-swings has rarely been more securely focussed. Right now, I cannot think of a more swinging disc with music that is visceral, energetic and music that does the idiom of jazz more justice. Why so, one is wont to ask? 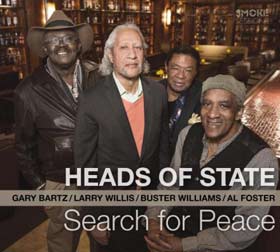 The unbridled genius of the four players that make up this quartet is the short answer. It is easy to appreciate this here as each musician pushes the next to dig deeper, perform better and reach heights that might never have been scaled before. Then there is also the magnificent technique of each of the players; the trickiest passages are negotiated as if they are child’s play. But what impresses most is the musicianship of the four artists who are able to make the listener aware of the emotional import of each phrase, apparently spontaneously, as though they only just considered playing it that way. Take the way that they play “Search for Peace” and “Lotus Blossom”. Each performer here is able to find a new tone colour, a different touch of subtle rubato. In the hands of the Heads of State, the music is like a living thing; one senses that each performance will have its own individual character.

The musicians delight in the moments of lyricism and in the times when attack is needed – listening to “Impressions” will provide a detailed picture – and each is happy to retire from the foreground to let the ensemble take over. But mostly the musicians show an impressive command of the larger musical paragraphs as in the long melody that makes up “Search for Peace”. In the subsequent pace of “Capuchin Swing” their impressive are reading of the lyrical theme is just as enthralling. Instruments – horn and piano, especially – are used to heighten the expressive effect. But it is all of the musicians who do so discreetly and tastefully.

The coupling of these fine musicians – the often neglected genius of Gary Bartz is on display throughout, piano maestro Larry Willis shines too as do the great bassist Buster Williams and the ever lyrical Al Foster – makes for a marvellously sympathetic performance. Not only is each of these masters attuned to the jazz idiom, their gorgeously supple and consistently touching contributions have both innate good taste and notable depth of feeling to commend them. Moreover with Gary Bartz lending personable and attentive support (when needed) this has to be one of the most communicative accounts of jazz standards to have come my way in recent years and represents the icing on the cake of an undeniably attractive package.