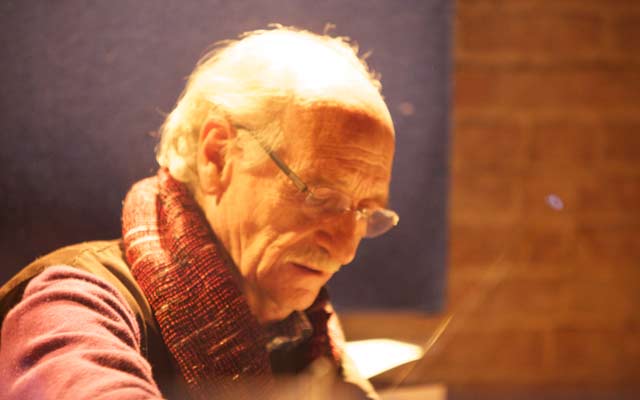 Far from being the grey eminence of jazz drummers, Jerry Granelli has been touchstone of youthful energy that would leave many younger drummers stranded in the dust. From his iconic work in the ‘60s, with Sly Stone and others including Ralph Towner, Mr. Granelli has grown to become one of the world’s finest percussion colourists. His music is woven from gossamer-like threads that have been woven into a sound tapestry that spans perceptible dimensions of music as well as its quintessence. His ethereal, passionate virtuosity is at once evocative and rhapsodic, and listening to his music leaves an indelible stamp on the heart and the mind. This is why his music is creatively stimulating. He imparts to it a sustained lyricism and a visceral presence throughout the music on this disc. 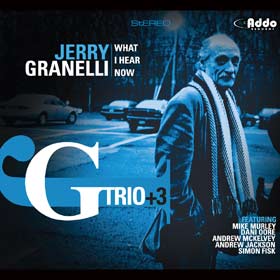 While the musical highlights may be spread across the seven charts on What I Hear Now perhaps the epitomé of the disc is the composition of the group – comprising four horns and a rarely-used string instrument that traverses the low bass. Remarkably, however, this partnership of Mr. Fisk and Jerry Granelli does not simply counter the horns with a rhythm section, but also shares in the melodic and, in the case of the 3-string bassetto, the harmonic duties as well. The music convinces on its own terms. All seven tracks call for not just proficient reading, but also polished technique and above all uninhibited imagination. Jerry Granelli can have that effect on musicians. Even as drummer, sitting away from the rest of the musicians he eggs them on as he brings a wealth of profound musicality, ardour and insight to bear, making his an interpretation to cherish and follow wherever he may lead.

The performance of this ensemble on this complex, but effervescent music is stellar. The music calls for unfussy playing. The group responds to this directive, not written, but probably instructed and definitely directed. Nothing is routine. There’s energy and eclecticism throughout the routine, especially in the way in which the solo instruments are put through their virtuoso paces. The overall effect is lively and accessible. Listen to the dark, yet witty “Run Danny Run” and the eloquent “Dance With Me” and you will hear what I mean. The opening, “Prologue” sets the tone. It features an effective solo passage played with controlled poise and power by Jerry Granelli.

But merely citing individual pieces does not do justice to the repertoire and the ultimate whole of the music. What I Hear Now is Jerry Granelli’s new palimpsest. It has a tightness of organisation that is genuinely composerly. Driven forwards by a timpani-like motif every so often, the drumming torches a swirling, tear-it-up percussion cadenza whenever the opportunity arises. These moments are echoed throughout the music’s forward motion, together with tumbling saxophones and 3-string bassetto. Jerry Granelli’s characteristic rhythmic stride ignites the whole work making it feel like a satisfyingly unified; idiom-perfect performance.

Born in 1940, and now at 74, Drummer/Composer/Professor/Sound Painter Jerry Granelli has enjoyed an incomparable career in music from the inside out…way out! The winner of the last NEA Grant awarded ascended from playing with the great pianist Vince Guaraldi at the height of his popularity while simultaneously exploring Free Jazz on San Francisco’s thriving after hours sets in the early `60s to establishing academic arts curriculums to indoctrinate and perpetuate alternative musical forms such as Spontaneous Composition in the present. A pioneer of `60s psychedelic sounds, a sideman on a Top 5 pop hit and a session musician for Sly Stone, Granelli is a forward thinking master in the art of music. Since the late `80s, he has recorded over 20 albums as a leader and/or soloist…in jazz and the indefinable beyond. Read more…