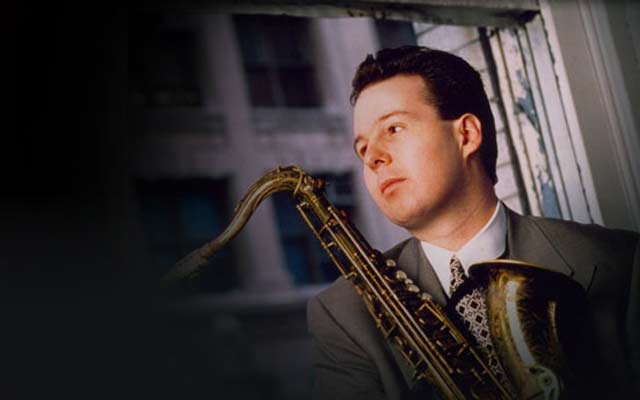 Among all of the great American composers, George Gershwin, Cole Porter and Duke Ellington come most easily to mind. As with the composers, so also with the tenor saxophone; and here few players come to mind as quickly as Harry Allen. All of those men have been bedfellows in some or many instances, but few as memorable as this one simply entitled For George, Cole and Duke, an album of music that Mr. Allen shares with the extraordinary whimsy and fervour of, among other outstanding musicians, bassist Nicki Parrott. Together they make you fall in love with music and their instruments all over again. 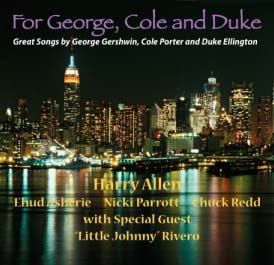 This Quartet (and sometimes quintet) set the bar very high with their astoundingly fresh, supple readings of thirteen classic tunes and it would be no surprise if accolades were forthcoming the album would rocket to the top of the pile quite swiftly because here at last is a seriously recommendable versions from three unforgettable songbooks. And what a triumvirate those men are and what a quartet to capture some of their most enduring repertoire. The quartet tends to play up the extremes in the music, notably in the instrumental versions, with their exquisite gradations of dynamic and timbre. Leading the chase, of course is Harry Allen, a saxophonist who has revived the romance of the instrument almost single-handedly.

Mr. Allen bypasses the ever-controversial arena of tenors to give performance after performance of a surpassing brilliance and character. However hard the slog in the practice room (such dazzle and re-creation result from intense discipline), there is a sense of joyful release, of music-making free from all constraint. It is hard to separate which of the repertoire – which of the composers – Harry Allen plays best. HIS most substantial gems are all over the disc. Mr. Allen gives us the music of our timeless contemporaries. What drama and vitality he finds in this music, what spring and swagger in the best of them, what unflagging but unforced brio. And what spectacular pace and energy in that big voice of absolute calm.

Bassist Nicki Parrott plays exquisite foil to Harry Allen’s dramatics throughout. It appears to be very much in keeping with this musical adventure where the duo applies all of their efforts with particular elegance to entwining melody, which is here encased in warmly voluptuous sound. But beauty is never at the cost of musical direction and a sense of the pacing of the quartet as a whole. Again in ensemble passages the music is also particularly compelling. The group bring a certain warmth to slower passages and superbly manage the rhythmic stability of it all capturing darting febrile measures with precision and grace.

One of the most striking aspects of the disc is Ellington repertoire for the manner in which the great one takes the lower registers of the instruments right out of their comfort zones . Mr. Allen responds to particular poignant effect here in movements that are so unstable as to be admired. The shifts in mood are a real challenge, here superbly caught with almost hymnic grace, which could yield to slightly more rhythmically agitated writing at the drop of a hat, a gear-change that you simply don’t notice here, so naturally is it done. All of this is encapsulated in a recording that is immediate and present.

Track List: Always True To You In My Own Fashion; In A Mello Tone; Happy Reunion; Silk Stockings; Purple Gazelle (Angelica); How Long Has This Been Going On? I Love You Samantha; Shall We Dance? By Strauss; Love For Sale; They All Laughed; Who Cares? Mood Indigo

Gene Lees writes, “Stan Getz was once asked his idea of the perfect tenor saxophone soloist. His answer was, ‘My technique, Al Cohn’s ideas, and Zoot’s time.’ The fulfillment of that ideal may well be embodied in thirty-year-old Harry Allen.” Swing Bros. recording artist Harry Allen has over thirty recordings to his name. Three of Harry’s CDs have won Gold Disc Awards from Japan’s Swing Journal Magazine, and his CD Tenors Anyone? won both the Gold Disc Award and the New Star Award. Read more…